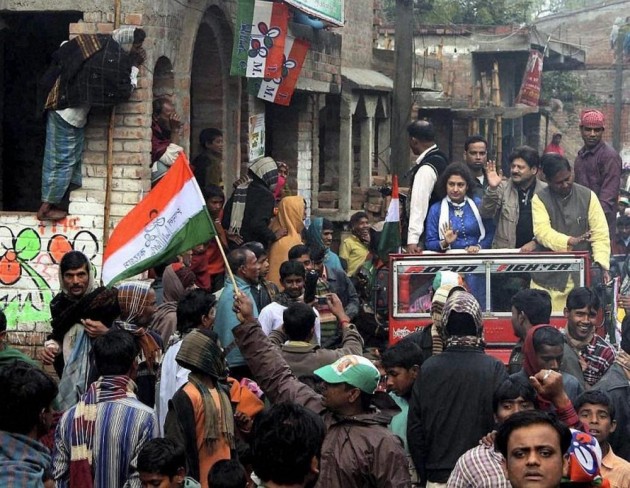 TMC MP Tapas Pal was today arrested by CBI for his alleged involvement in Rose Valley Chit Fund scam, drawing angry condemnation from West Bengal Chief Minister Mamata Banerjee who called it "political vendetta" by the Centre over the party's opposition to demonetisation.

BJP on its part said that finally law has caught up with Pal and that CBI is following the process of law even as it asked Banerjee not to give a political twist by questioning the timing and calling it political vendetta.

"We have arrested Tapas Pal for his alleged involvement in the Rose Valley Chit Fund scam. We had placed a few questions before him and he could not give any proper reply over the amount of money he had taken and on what basis," a senior CBI official told PTI.

"Pal was interrogated for four hours. As he failed to give proper reply to any of the questions on his appointment as director to one of the Rose Valley companies or his involvement in the firm investing in bengali film industry, the CBI decided to arrest him," the official said.

The probe agency is likely to take the Lok Sabha MP from West Bengal to Bhubaneswar for further questioning.

CBI had issued summons to Pal on December 27 in connection with the alleged scam, which is one of the cases of the chit fund scams being probed by the investigating agency. He was asked to appear before the agency at its office in Salt Lake today.

"They (Centre) can arrest all of us. This is nothing but vendetta politics," Mamata said reacting to Pal's arrest.

Strongly reacting to the arrest, Trinamool Congress(TMC) said BJP was resorting to "political atrocities" against those opposed to demonetisation.

"So now political atrocities against those opposed to Note Bandi and with the movement. We will fight it out," TMC national spokesperson Derek O'Brien said claiming that the party and its leaders were being targeted by BJP-led NDA government at the Centre for protesting against note ban.

"What about BJP MP and Union Minister who performed for Rose Valley and was associated with them? Are you arresting him tonight or tomorrow?" asked O'Brien without naming anyone in a series of tweet messages following Pal's arrest by CBI this afternoon.

"Finally, law has caught up with TMC MP Tapas Paul. CBI is following the process of law and Mamata ji should not give a political twist by questioning timing and calling it political vendetta . We have seen in past that she tried to web a conspiracy theory of plane crash and army coup but nobody bought them," BJP National Secretary Sidharth Nath Singh said.

Singh, who is also the party's co-incharge for the state, said the TMC chief should know that "sins" of her rule are being exposed by the law now.

"Why your (TMC) leaders are involved in all chit fund scams? Sins of her misrule are being challenged by the law of land and she must accept arrest of Tapas Paul," he said in Delhi.