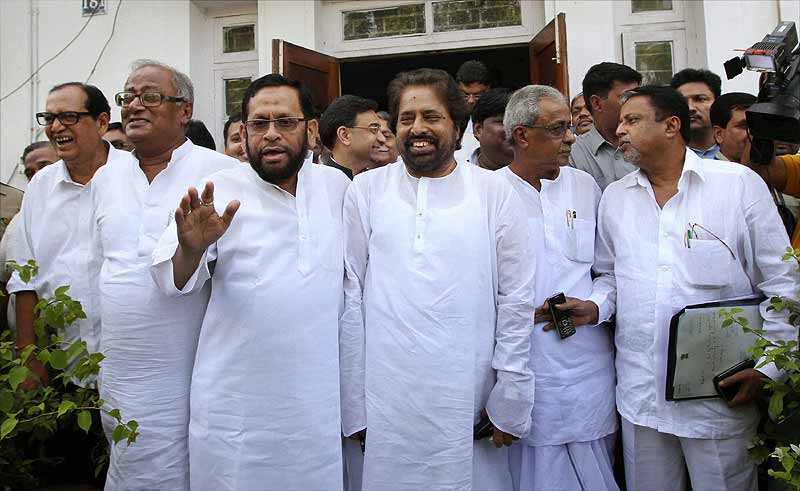 outlookindia.com
-0001-11-30T00:00:00+0553
Trinamool Congress today formally withdrew support to the UPA government and its six Ministers quit in protest against FDI in retail.

The party, which has 19 members in the Lok Sabha, gave a letter withdrawing support to the government to President Pranab Mukherjee.

Significantly, the TMC did not not press for a vote of confidence by the government in the Lok Sabha when they met President Pranab Mukherjee.

Straight from there, they went to the Rashtrapati Bhavan to give the letter of withdrawal to the President.

"We, the six Trinamool Congress Ministers of the Council of Ministers, including Cabinet Minister, went to the Prime Minister's residence at 4 pm and we handed over to him individual letters of resignations of all the six Ministers," said Saugata Roy.

"Now, we have come to Rashtrapati Bhavan and handed over a letter to President Pranab Mukherjee, signed by Mukul Roy, Chairman of Trinamool Congress Parliamentary Party, withdrawing our support to UPA-II government... The President has accepted our letter of withdrawal of support," he said.


Later, a Rashtrapati Bhavan communique said the TMC delegation, which met President Pranab Mukherjee today, communicated in a letter their withdrawal of support to the UPA government with "immediate effect".

"A delegation of the All India Trinamool Congress (AITC) led by Mukul Roy General Secretary, AITC and Chairman AITC Parliamentary Party (Lok Sabha and Rajya Sabha), called on the President at 4.30 pm today and submitted a letter communicating withdrawal of support to UPA-II with immediate effect.

Earlier, while receiving the resignation letters, the Prime Minister said he was "sad" that they were quitting, Bandhyopadhay said.

Asked whether Trinamool leaders had demanded a floor test by the government to check its majority, Saugata Roy said, "no, we did not. Beyond what I have told you, we have not said anything extra."

He refused to reveal what the Prime Minister told them, saying it was confidential.

However, Mukul Roy said since the majority of parties were opposing the FDI in retail the government should seek a vote in Parliament on the issue.

On its part, the government ruled out seeking a confidence vote in the Lok Sabha.

Mukul Roy was the only Cabinet Minister among the six holding Railways portfolio since March.

A Trinamool leader said the Prime Minister told them that they were good allies of the government and he was aware of their political compulsions for pulling out of UPA.

"You were good allies. I can understand your political compulsion," said the leader when asked what the Prime Minister told them when they handed over their resignation.

The leader was among the six union ministers who resigned from the government today.

In Kolkata, West Bengal Chief Minister and Trinamool Congress chief Mamata Banerjee said notifying implementation of the decision on FDI in multi-brand retail by a "minority government" was unethical and undemocratic.

"We are in the fight to protect the interests of the people. We will win," Banerjee said.

Trinamool Congress chief Mamata Banerjee on Wednesday had announced her decision to withdraw support to the UPA protesting the Centre's decisions to hike diesel prices, withdraw subsidy on cooking gas and allow FDI in multi-brand retail.