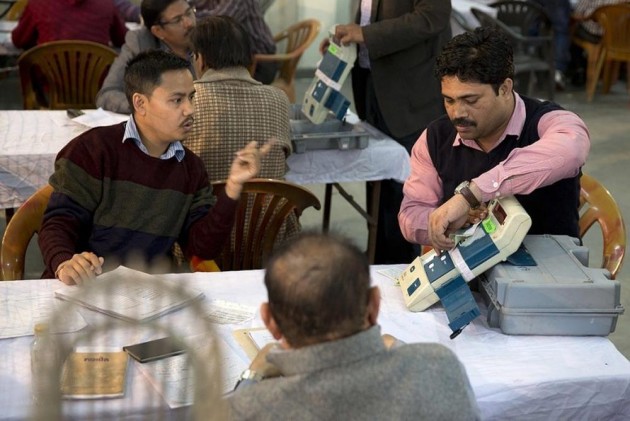 Citing "prevailing environment", Chief Election Commissioner Nasim Zaidi has urged the government to speed up release of funds for timely procurement of paper trail machines so that these can be deployed in the 2019 Lok Sabha elections.

In a fresh letter to Law Minister Ravi Shankar Prasad which sounds like an SoS call, he has also said that the Supreme Court, while hearing a contempt petition, has directed the poll panel to bring on record the approximate time within which the entire system of voter verifiable paper audit trail (VVPAT) can be introduced.

Though the CEC did not elaborate what he meant by "prevailing environment", he was apparently referring to Opposition parties questioning the reliability of the EVMs and pressing for the deployment of more VVPATs, which dispel doubts about votes cast using EVMs.

The BSP, the AAP and the Congress had attacked the EC for allegedly using "tampered" EVMs. Sixteen parties, not including the AAP, had recently petitioned the EC to revert to paper ballot system for greater transparency.

In his letter, Zaidi recalled that he had already informed the government that if the order for supply of VVPAT was not placed by February, 2017, "it would be difficult for manufacturers to supply the VVPATs by September, 2018" to meet the requirements of the next general elections.

The Election Commission would need over 16 lakh paper trail machines to cover all polling stations in the 2019 Lok Sabha elections. The cost is estimated at Rs 3,174 crore.

VVPAT is a machine which dispenses a slip with the symbol of the party for which a person has voted for. The slip drops in a box but the voter cannot take it home.

The voters see voter-verifiable paper audit trail slip for seven seconds, which would be an acknowledgement receipt for the party they voted for in the election.

In his March 22 letter to the law minister, Zaidi pointed out that the Commission had informed the apex court that "required number of VVPATS can be manufactured from the date of release of funds in 30 months as per current capacity of the two manufacturers -- Bharat Electronics Ltd and Electronics Corporation of India Ltd".

The CEC said, "The process of procurement of VVPATs cannot be delayed any longer given the prevailing environment... The Commission stands fully committed to deploy VVPATs along with EVMs in all future elections "so that transparency of electoral process is enhanced, integrity of the voting preserved and the voters' confidence in the process is further strengthened".

Since June, 2014, the Commission has given at least 11 reminders to the government seeking funds for VVPAT machines. Last year, Zaidi had written to Prime Minister Narendra Modi drawing his attention to the funds needed for the machines.

On April 7, Minister of State for Law P P Chaudhury had told the Rajya Sabha in a written reply that "the proposal of the Election Commission (to buy VVPATs) is under consideration of the government."

Legislative department of the law ministry is the nodal unit for the poll panel and financial demands and proposals to change laws and rules are referred to it by the EC.

Continue FREE with Ads Pay Rs. 1 to Read Without Ads
READ MORE IN:
Ravi Shankar Prasad National
Next Story : 50 Virtual Museums To Be Set Up To Highlight Role Of Tribals In Freedom Struggle: PM Modi
Download the Outlook ​Magazines App. Six magazines, wherever you go! Play Store and App Store