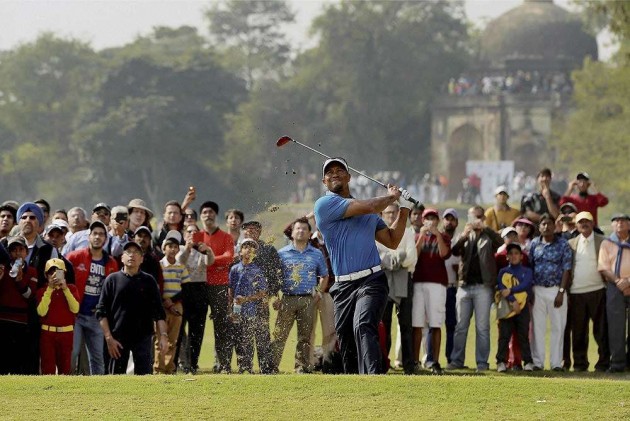 The legendary Tiger Woods today kept his date with India as the world number one golfer not only tamed the difficult Delhi Golf Course with a nine-under score but also conquered hearts of the thousands of people who came in hordes to have a glimpse of him.

In a lucrative 18-hole exhibition match, Woods mesmerised the spectators with his immaculate sense of the game as he hardly put a foot wrong and had most greens in regulation in the DGC, which is known for its narrow fairways.

The 38-year-old Woods, who is in the capital on an invitation from Hero MotoCorp CEO and Managing Director Pawan Munjal, showed why he is considered to be the greatest golfer as he went about his business with consummate ease on a warm Tuesday morning.

The top golfer has been reportedly paid Rs 15 crore to play a round of golf with Munjal and his guests.

A visage of Woods appeared around the fairways after compere Alan Wilkins announced the golfer's arrival at the first hole. After a few practice shots and exchange of pleasantries, Woods teed off amid a couple of thousands people who had thronged the DGC, which was supposed to be a hushed-up private event here.

Dressed in a blue tee-shirt, black trousers and white cap, Tiger started off with a wonderful shot straight down the middle, which was the hallmark of the man all through the day as he played along with his host Munjal exclusively for the first nine holes and returned with a card of six-under.

In the next nine holes, Woods was accompanied by Rajiv Singh of DLF and Justice Vikramajit Sen of Supreme Court on the 10th and 11th holes, while leading Indian woman golfer Sharmila Nicollet played a couple of holes at the 12th and 13th, before media honchos Prannoy Roy and Aveek Sarkar joined the golf great at the DGC.

On the last three holes, it was a skins game between two teams - Pawan Munjal- Tiger Woods vs Shiv Kapur and Anirban Lahiri, which ended on an even keel with Kapur winning the 17th hole with a birdie and Munjal and Woods pocketing the 18th hole with both hitting birdies on the last.

After the end of the 18th hole, Woods waved to the more than 5000 crowd which had gathered near the stand and cheered the American legend, whose visit was organised by World Sports Group (WSG).

"Thanks so much for the time, it was an absolute blast. It is hard to say how much fun I had today. It was a narrow golf course and I was nervous with my tee shot. My best buddy Arjun (Atwal) told me so much about India and I am happy to be here. Thank You so much," said Woods, who donated some portion of the money he earned from the event to charity organisation.

Woods found the bunker only twice but he found his way out on both the occasions. The only time, he had to drop a shot at the 11th hole when his tee shot landed on the bushes of the DGC. It cost him a bogey.

Munjal, dressed in a green tee-shirt and white trousers, played the entire stretch of 18 holes and after the round promised that he would bring Woods to play a tournament in India soon.

"The way Woods was playing, I think he should come back again to play in Indian Open. I am honoured to be able to get him to India on his first visit. Let me say it won't be his last visit to India," Munjal said.

The veil of secrecy that enveloped the run-up to the event didn't stop people from stealing a glimpse of Woods as they came in hordes and followed him all through out the 18-holes.

The 2000-odd crowd was so excited to watch Woods that they spilled over to the golf course, giving a nightmare to the security people who had a difficult time cordoning off the playing area with the help of a rope.

Woods gave his fans ample opportunities to cheer for him as he fired as many as 10 birdies on a course which is considered to be difficult to tame. The American could have hit more birdies but he struggled with his putting a bit.

Among the thousands of spectators who gathered here, cricketers Madal Lal and Murali Karthik were some of the prominent names.

"I am excited to see him. I am here just as a spectator," Murali said.