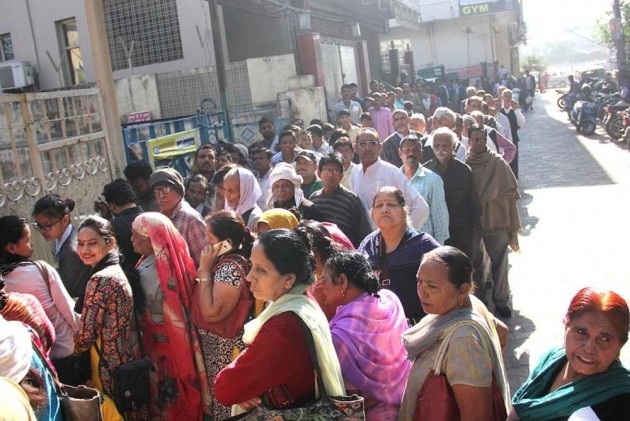 The Delhi High Court today took up three separate petitions which questioned the Centre's decision to impose a cap of Rs 24,000 a week on withdrawal and allowing the use of old Rs 500 and Rs 1,000 currency notes in hospitals and petrol pumps while seeking a direction to ensure sufficient cash in ATMs.

The issues relating to use of old currency notes at certain public utility centre and demand for filling the ATMs with enough currency notes came up before a bench comprising Chief Justice G Rohini and Justice V K Rao which decided to wait for tomorrow's hearing in the Supreme Court on Centre's plea seeking transfer of all cases from across the country on demonetisation to the apex court or one of the high courts.

Another petition, which prayed for removal of the cap of Rs 24,000 on withdrawal a week was mentioned before a bench of justices B D Ahmed and Jayant Nath which listed it for hearing tomorrow before the bench headed by the Chief Justice.

The three petitions were filed in the high court after the apex court on Friday last had declined the Centre's plea to stop high courts and courts across the country from entertaining the matters relating to challenge to the November 8 notification demonetising the Rs 500 and Rs 1,000 currency notes.

The matter listed tomorrow in the high court is a PIL by a Delhi resident, who has urged that there should not be any cap on withdrawal of amounts deposited with the banks before the coming of the November 8 notification.

The hearing on the other two issues have been fixed for December 8 as the bench of the Chief Justice will wait for tomorrow's outcome in the apex court.