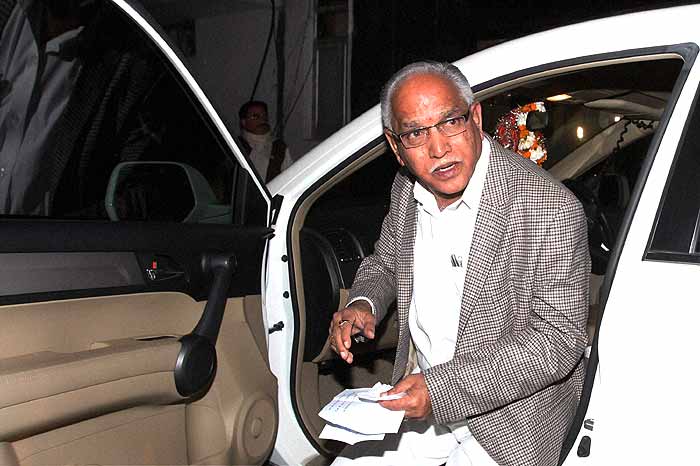 outlookindia.com
-0001-11-30T00:00:00+0553
In fresh trouble for Karnataka Chief Minister B S Yeddyurappa, three more private complaints were today filed in a city court against him and some of his family members in connection with alleged corruption in denotification of land.

The complaints registered in the 23rd Additional City Civil and Sessions Judge C B Hipparagi, who is also the special judge for lokayukta cases, listed three offences each relating to alleged illegal land deals.

With this, a total of five private complaints have been filed against Yeddyurappa, who became the first ever chief minister in Karnataka's history to face prosecution on corruption charges.

The complainant, Sirajin Basha, one of the two advocates who had secured sanction from Governor H R Bhardwaj for prosecuting the chief minister, has named Yeddyurappa as the common accused in all the complaints.

The complainant also named some of the developers and companies including Bhagath Homes, Davalagiri Property Developers, Adarsh Developers, Balaji Krupa Enterprises, Sahayadri Health Care and Diagnostics, as among the beneficiaries of the land deals.

In all five complaints, enlisting 15 crimes and naming 27 accused with some names common in these complaints, have been filed before the court since Saturday, a day after the Governor gave his controversial sanction for prosecution, that has intensified the political battle between BJP and him.

The complainant alleged that the Chief Minister had abused his power and position to "secure illegal pecuniary gains to his kith and kin" and had in the process "flouted all rules, regulations and settled procedures causing irreparable damage to the ex-chequer of the state".

Citing the various instances the complainant alleged that they revealed a "clear nexus between the accused persons.

"The instances reveal alleged cases of cheating, criminal breach of trust, criminal conspiracy, abuse of official position, loss to the state exchequer, securing illegal monetary gain for kith and kin by high ranking public servants", all of which are liable to be punished under various penal provisions of the Indian Penal Code, Prevention of Corruption Act and other relevant acts, he submitted.

Due to the huge amount of documents to be processed, list of accused and witnesses, the court has posted the three complaints for report from the court's office and possible hearing to the first week of February.

The instances listed out by the complainant include "illegal allotment of site in HSR Layout to R P Shankar, the maternal uncle of Sohan Kumar (Chief Minister's son-in-law) and subsequent illegal transfer of this site by the accused.

The complainant alleged that Yeddyurappa, when he was the opposition leader, had given a representation to the then Chief Minister Dharam Singh for alloting a site to Shankar.

Following allotment of the site by the BDA, Shankar later transferred it to the mother-in-law of Sohan, which again was subsequently executed as a gift deed to Sohan Kumar. The transfer of land took place contravening all rules during the tenure of Yeddyurappa's Chief Ministership, causing a huge loss of Rs 1.92 crore to the government, he claimed.

The charges also include "criminal breach of trust committed through illegal denotification of land to extent of over five acres in Nagarabhavi village" in "violation" of Supreme Court and High Court orders.

The complaints also allege pecuniary advantage received by Davalagiri Property Developers, promoted by the kith and kin of the Chief Minister, and the criminal breach of trust committed by illegal denotification of land at Sreerampur Village for benefitting Besto Infrastructure, with which the Chief Minister's relatives were in some way associated.

The complaint also cites the illegal allotment of site to Raghavendra and Bharati Shetty in RMV Area. It also alleges pecuniary advantage by Shayadri Health care and Diagnostic Limited for illegal denotification of land at Uttarahalli, securing immovable property for the benefit of Healthzone Advisers.

The complainant also said he had been constrained to approach the Governor for seeking sanction for prosecution as the written complaint to the Karnataka Lokayukta had not been entertained.

Continue FREE with Ads Pay Rs. 1 to Read Without Ads
READ MORE IN:
B.S. Yeddyurappa National
Next Story : Don't Enter Into Treaty with US on Terrorism: Bardhan
Download the Outlook ​Magazines App. Six magazines, wherever you go! Play Store and App Store