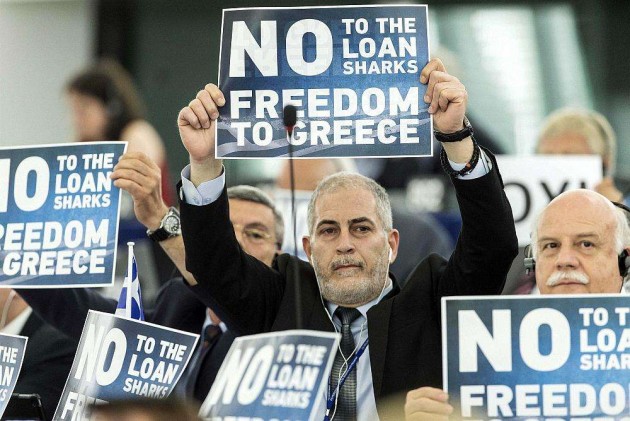 Thousands of anti-austerity protesters gathered in Athens today night as lawmakers prepared to vote on a second batch of reforms that must pass if Greece is to unlock a huge international bailout.

The vote poses a fresh challenge to Prime Minister Alexis Tsipras' authority, after he suffered a major rebellion by MPs in his leftist party Syriza last week during a first vote on tough reforms demanded by Athens' international creditors.

Tsipras had to rely on opposition MPs to pass the law, which approved sweeping changes to debt-crippled Greece's taxes, pensions and labour rules -- key conditions for opening talks on a bailout worth up to 86 billion euros ($93 billion) over three years.

Some 6,000 demonstrators gathered outside parliament ahead of Wednesday night's vote to protest against the cash-for-reforms deal, according to police.

Members of the Communist-affiliated PAME trade union made up the bulk of the crowd.

A handful of petrol bombs were lobbed in the direction of the security forces, who had thrown up a ring of steel around parliament after riots during last week's vote on austerity measures.

Tsipras is expected to win Wednesday's vote comfortably after opposition parties said they would back it, but analysts say the debate will show whether the premier can avoid another deep split within his own party and head off the risk of early elections after only six months in power.

Katerina and George Sergidou Kokkinavis, two Syriza members in their thirties taking part in Wednesday's protest, said they had come because "the government is no longer listening to the people".

Syriza came to power on an anti-austerity ticket, but the government has gone on to ignore a referendum result in which Greeks came out against further cuts, and agreed to a deal that involves more painful reforms, hoping it will prevent the country from crashing out of the eurozone.

The second bill, less controversial than the first, covers civil justice reforms, a bank deposit protection scheme, and measures to shore up the liquidity of the banks, which reopened Monday after a three-week closure imposed to avert a catastrophic bank run that could have seen Greece's financial system collapse.

The banks have seen some 40 billion euros withdrawn since December by customers anxious over the safety of their cash -- seriously undermining the banks' ability to function normally.

The ELA is the only source of funding for banks until the bailout package can take effect -- and, by extension, the sole financial lifeline preventing the Greek economy from imploding.

Finance Minister Euclid Tsakalotos said he hoped to see the banks recapitalised by the end of the year.