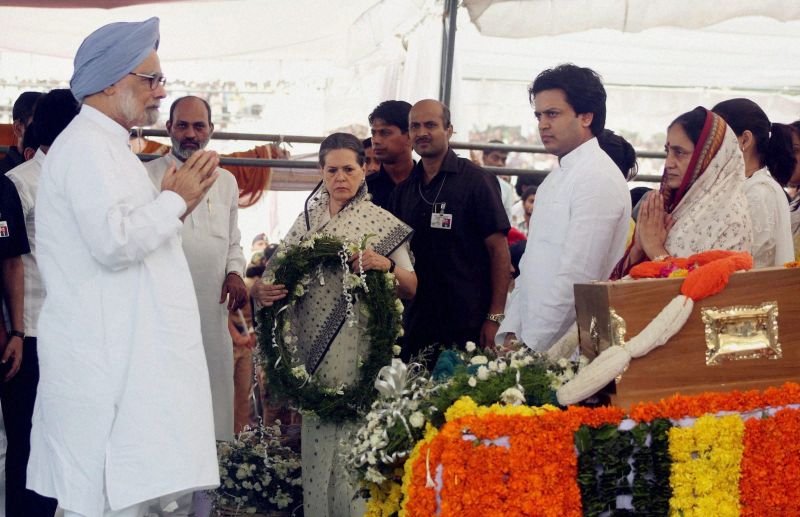 outlookindia.com
-0001-11-30T00:00:00+0553
A mass leader, Union minister Vilarao Deshmukh was given a tearful adieu today by tens of thousands of grieving people at his native village here from where he began his political journey as an obscure sarpanch four decades ago.

Shortly before Deshmukh's body was consigned to flames, a solemn-looking Prime Minister Manmohan Singh and Congress President Sonia Gandhi placed wreaths on the casket carrying the body of Maharashtra's tallest Congress leader and former chief minister at Dayanand Vidyalaya where it lay in state for public to pay their last respects.

A sea of humanity, including hundreds of moist-eyed women, converged here, on the outskirts of district town of Latur, for the last glimpse of the illustrious son of the soil who rose in their midst to walk the corridors of power in Mumbai and Delhi.

In a reflection of the goodwill some of soft-spoken Deshmukh's political rivals had for him, BJP president Nitin Gadkari and party's deputy leader in the Lok Sabha Gopinath Munde were also present. So were former Karnataka chief minister Dharam Singh.

The last rites were performed by Deshmukh's eldest son and Latur town MLA Amit at a family farm close to where his father Dagdojirao Deshmukh was cremated.

Deshmukh, 67, died yesterday at Chennai's Global Hospital from serious liver ailment, a week after he was flown in an air ambulance from Mumbai in a critical condition.

Sonia walked up to Deshmukh's widow Vaishali, who fought back tears, and held her in comforting embrace as the Prime Minister offered his condolences to the departed leader's son Amit. Deshmukh's teary-eyed family members, including his wife, actor son Riteish and Dheeraj, acknowledged with gratitude the condolences with folded hands.