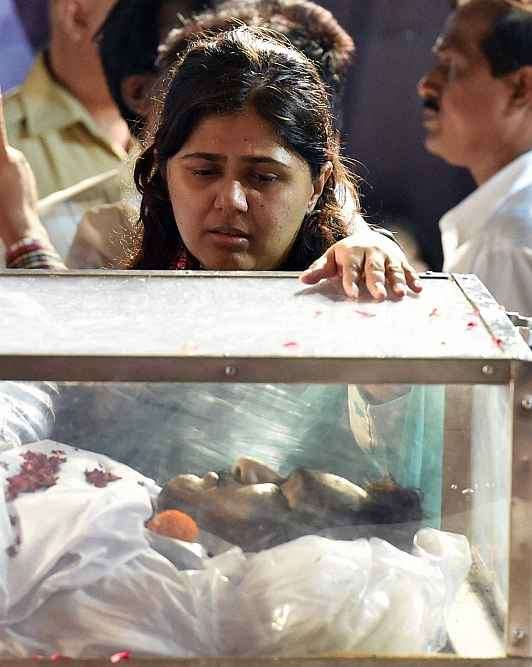 Tens of thousands of mourning supporters and distraught family members today bid a tearful farewell to Gopinath Munde, Maharashtra BJP's tallest mass leader and architect of its impressive victory in the Lok Sabha elections, who was killed in a car crash yesterday.

A sea of humanity converged at his home town to pay last respects to the towering leader from the backward Marathwada region as her eldest daughter Pankaja lit the funeral pyre amid roars of "Gopinath Munde amar rahe" and "Munde Saheb parat ya (Munde Sir, come again)."

Munde, 64, Union Rural Development Minister, was yesterday killed in a road accident in Delhi while he was on way to Parli for a felicitation following his own and BJP's resounding victory in the Lok Sabha elections, which saw him re-elected for a second time from Beed.

However, in a cruel twist of fate, he could not reach there alive and only his mortal remains were brought to the Baidyanath Sugar Factory compound for performing the last rites, a few kilometres away from 'Totla Maidan', the venue of the felicitation that never happened.

The BJP veteran is survived by his wife Pradnya and three daughters including Pankaja, BJP MLA from Parli and heir to his political legacy.

Pankaja lighting her father's funeral pyre marked a departure from the Hindu tradition of a male member of the family doing duty and signaled her taking over the leader's political mantle.

Munde, a backward class leader, who started his political career as a student leader and rose to become the Deputy Chief Minister of Maharashtra in 1995, when BJP-Shiv Sena came to power in the state for the first time, was to lead his party's assembly campaign.

He was also seen by many as a formidable contender for the Chief Minister's post in the event of the alliance forming its government after the assembly elections four months from now.

But fate willed otherwise and Munde died in a crash a week after being sworn in as Union minister but before he could take oath as MP.

With his brother-in-law Pramod Mahajan, another towering BJP leader from Maharashtra whose promising political career was snuffed out in May 2003 after he was shot by his younger brother, Munde was an architect of the BJP-Sena alliance which has stood the test of time.

He was considered the glue that still binds the two saffron allies.

His departure from Maharashtra's political scene has left BJP bereft of a charismatic leader months before the crucial electoral battle for control of the key western state.