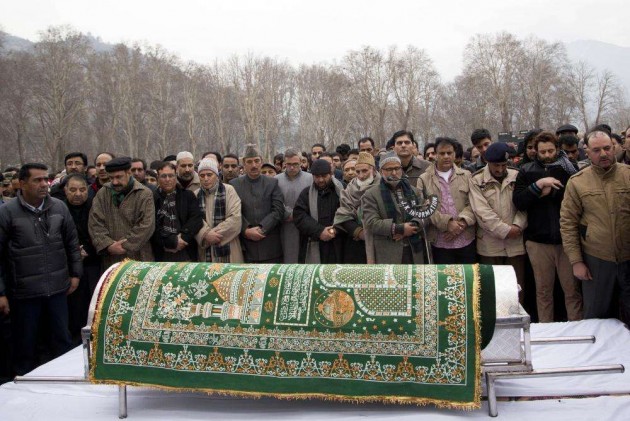 A large number of people swarmed into Dara Shakoh Park here, 45 kms from Srinagar, where Sayeed was laid to rest on Thursday after passing away at AIIMS in New Delhi earlier that day.

People had started getting inside the park since early morning, officials said, adding they had come from all the corners of the Valley to pray for the late chief minister.

As soon as Sayeed's daughter and Peoples Democratic Party (PDP) President Mehbooba Mufti reached the Park, many of her party workers turned emotional, and raised slogans in favour of Mehbooba and her father.

They raised slogans eulogising Sayeed. Many women were also present in the park.

Mehbooba - wearing a black 'pheran' (traditional Kashmiri cloak)- along with her family including her mother and Sayeed's wife Gulshan Nazir, stood near his grave offering prayers and weeping for most part of their stay there.

As soon as the prayers culminated, Mehbooba went on a stage and waved at the people expressing her gratitude to them.

She then left the venue without saying a word.

Apart from PDP leaders and former ministers, BJP leader and former deputy chief minister Nirmal Singh and others were present on the occasion.

The condolence meeting continued at the Fairview residence of the Muftis where thousands of people from all walks of life visited to pay their last respects to the departed leader.