Those Guilty Of Corruption 'Should Be Hanged Till Death', Says Anna Hazare 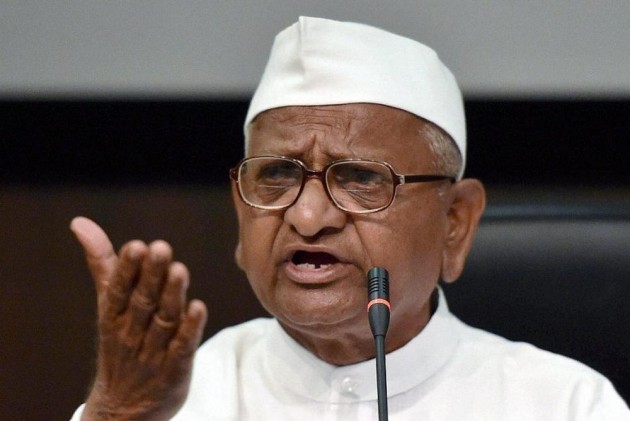 Print
A
A
A
increase text size
Outlook May 09, 2017 10:03 IST Those Guilty Of Corruption 'Should Be Hanged Till Death', Says Anna Hazare

Social activist Anna Hazare on Monday said he believes in transparency in the government, adding that whoever found guilty in corruption charges should be hanged till death.

"I have always said one who is found guilty in corruption charges should be hanged till death," said Hazare.

He said that he is very upset with the charge made by sacked Aam Aadmi Party (AAP) MLA Kapil Mishra on Delhi Chief Minister Arvind Kejriwal, adding that the matter should be investigated thoroughly.

"After listening such things, I am feeling very sad. There was a day when we were fighting against terrorism without being concerned about our life and now such allegations are being made against Kejriwal. I cannot say whether the allegations are correct or not, but the matter should be investigated, then only the entire truth would be revealed," he added.

Meanwhile, the AAP Political Affairs Committee (PAC) suspended Mishra from the primary membership of the party.

Mishra, whose stunning allegations against Kejriwal threw the AAP into turmoil earlier in the day said he will approach the Central Bureau of Investigation (CBI) and lodge an FIR tomorrow.

"Satyendra Jain told me in a private conversation that he would settled a Rs. 50 crore land deal for a 7-acre farmhouse in Chhattarpur in favour of Kejriwal's brother-in-law's Bansal family. Being a PWD minister, he also fudged bills up to Rs. 10 crore in the department to benefit Kejriwal's relative," he alleged.

The AAP lawmaker stood by his decision not to quit the party and dismissed the charges that he was a Bharatiya Janata Party (BJP) agent bent on disrupting the party.

Mishra, who was sacked as minister on Saturday, reiterated his demand for a lie detector test on his allegations that he was an eyewitness to the Rs. two crore exchanging hands between Kejriwal and Jain. He said that a lie detector test be conducted on all three.

Earlier in the day, Mishra handed over documents to back his allegations that Kejriwal had delayed the probe into the Rs. 400 crore tanker scam.

Delhi Anti-Corruption Bureau (ACB) chief M. K. Meena said that the bureau would record Mishra's statement and after that the law will take its own course.

Meena also said that the sacked minister had yet to file a complaint on the alleged dubious transaction of Rs. two crore between Kejriwal and Jain. (ANI)