Theresa May to Take Over As British PM on July 13: Cameron 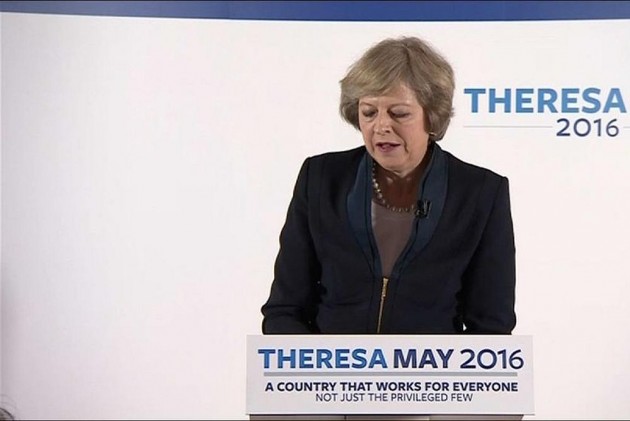 Theresa May will take over as new Prime Minister on Wednesday, British Premier David Cameron said today after the home secretary's only rival in the race to become Conservative Party leader pulled out unexpectedly.

Cameron said he will chair his last Cabinet meeting tomorrow and attend House of Commons for his last Prime Minister's Questions on Wednesday before heading to Buckingham Palace to offer his official resignation to Queen Elizabeth II.

"We will have a new Prime Minister in that building behind me by Wednesday evening," Cameron told reporters outside 10 Downing Street.

"I am delighted Theresa May will be Prime Minister. She has the overwhelming support of the Conservative parliamentary party...She is strong, she is competent, she is more than able to provide the leadership that our country is going to need in the years ahead," said Cameron, who had announced he would be stepping down for a new prime minister to take the Brexit negotiations forward with the European Union a day after the June 23 vote in favour of Britain leaving the economic bloc.

59-year-old May, who would become Britain's second female Prime Minister after Margaret Thatcher, made a statement outside the Houses of Parliament here soon after saying she is "honoured and humbled" to be chosen as leader of the Tory.

She paid tribute to Cameron for his "leadership" and other Tory party leadership contenders.

"Brexit means Brexit and we are going to make a success of it. We need to unite our country... We are going to give people more control over their lives and that is how we will build a better Britain," she said in her first speech.

The Prime Minister designate said she wants "best deal for Britain" with EU.

Earlier today, May's only rival Andrea Leadsom pulled out from the two-way contest for the Conservative party leadership in a dramatic move, leaving May sole contender.

The Oxford graduate is among longest-serving home secretaries in British history and has long been regarded as a potential future leader of the party.

Her political stock rose when, in 2013, she succeeded where many other home secretaries before her had failed and successfully deported radical Islamic cleric Abu Qatada to Jordan.

Leadsom, who was energy minister in the Cameron-led Cabinet, threw her support behind May as "ideally placed" to enforce the vote for Brexit in last month’s referendum on Britain’s membership of the European Union (EU).

"The interests of our country are best served from the immediate appointment of a strong and well-supported Prime Minister. I am therefore withdrawing from the leadership election and I wish Theresa May the very greatest success.I assure her of my full support," Leadsom told reporters.

"The best interests of our country inspired me to stand for our leadership. I believe in leaving the EU a bright future awaits. The referendum result represented a clear desire for change," the 53-year-old senior Tory MP said.

It then fell to the 1922 committee of Conservative MPs to decide the revised timetable for the leadership race.

Conservative MP Graham Brady, the chairman of the committee, told reporters soon after Leadsom's announcement that May is now the only candidate for the party leadership, which only leaves the formal announcement of her as party leader and PM.

The 22-member-strong Conservative Party board began urgent talks over handing the keys to No. 10 Downing Street to May, being dubbed the last woman standing by the UK media.

Cameron’s statement then confirmed that there was no need for a "prolonged" Conservative party leadership contest.

"After a meeting of the board I can now declare Mrs May the new leader of the Conservative party with immediate effect," Brady announced later today.

Leadsom's withdrawal had effectively nullified the need for a postal ballot by the UK-wide Conservative party membership and made it certain that a new leader would be officially declared much sooner than the September 9 timeline initially announced.

May had bagged the support of 199 MPs compared to Leadsom’s 84 in the second round of voting among Conservative MPs last week.

Leadsom’s announcement followed days of controversy around her candidature, which included allegations of exaggerating her curriculum vitae and most recently having to apologise to her rival over an interview to ‘The Times’ which suggested that being a mother made her a better candidate for the job.

May had recently publicly revealed her own sadness at not being able to have children.

Reacting to Leadsom's decision, May's campaign chief Chris Grayling MP said it showed what a "principled and decent politician she is".

In a message to the party, he said: "Now is the time for us to unite...And get on with the job of securing a strong, prosperous future for our country."

In a speech today setting out her leadership campaign platform and before the day’s surprising developments, May had said words she was to repeat again later in the day: "Brexit means Brexit and we're going to make a success of it."

There had originally been five contenders to succeed Cameron, with MPs voting in two rounds to get that number down to two - and the plan then was that the party's 150,000-strong membership would have had the final say.

Meanwhile, Opposition Labour, the Liberal Democrats and the Green Party are calling for a snap polls, rather than waiting for the contest scheduled for 2020 under the UK’s Fixed Term Parliaments Act.

Cameron has been British PM since 2010, first as the leader of a coalition government with the Lib Dems and then going on to win a majority for the Conservative party in the 2015 General Election.

However, it was his election pledge to offer a referendum to the British public on the country’s membership of the EU which was to lead to an abrupt end to his premiership.

The focus has quickly shifted to how May, seen as a fairly hard-nosed politician, will handle the Brexit talks as well as other complex issues. She had backed Cameron in his campaign to keep Britain within the economic bloc but has vowed to follow the will of the electorate.