There Should be 'Plebiscite' in Kashmir, Says Scindia 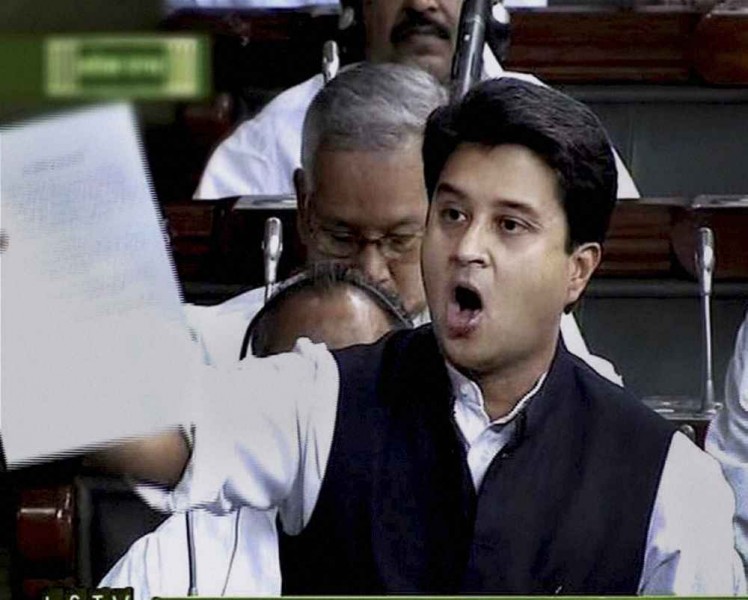 Congress leader Jyotiraditya Scindia today said in Lok Sabha that there should be "plebiscite" in Kashmir as the situation in the Valley has deteriorated and the PDP-BJP government has "insulted" the "crown" of India.

"In Kashmir today, there is a need for plebiscite," he said using Urdu word 'rai shumari' while initiating a discussion in the House on Kashmir situation.

"PDP-BJP government has shed all the principles. Administration is divided and the government, which should support people, is using weapons against them," Scindia said, adding "the wounds there can be healed only through humanity."

While attacking the Centre and state government, the Chief Whip of Congress said, "There is a need to create an environment of peace and tranquality; growth and development."

Describing Kashmir as "an important part of the heart of every Indian", he said, "but today that crown is being insulted. This I feel is irresponsible."

He said the UPA government had created an environment of peace and harmony by taking everybody along.

"The reality is that there is a marriage of convenience in Jammu and Kashmir," Scindia said referring to the alliance between PDP and BJP.

"The reality is that there is an identity crisis in the state government...Today it is ckear that there is a political upheavel and terrorism is flourishing in Jammu and Kashmir. 60 per cent population in the state is below 30 years of age. If we are not able to create opportunities for them, we would be pushing them towards militancy," the Congress leader said.

He said the central government has failed to provide safety and security to the people of the Valley.

In the last two years, infiltration has increased by 65 per cent and killing of soldiers has increased by 47 per cent, he said, asking the government, "secure our borders, secure our people before it is too late. We are with you. But act, act with a plan".

"The central government is sitting like a silent spectator. The government has miserably failed to control the power of foreign militants," he said.

The Congress leader said the incident of June 25 in Pampore, where eight CRPF soldiers died, was third such case.

"This is true that this happened because of inadequate security arrangements and it reflects failure of the administration," he said.

Scindia said after killing of a terrorist on July 8, an atmosphere of fear and tension has been created and subsequently 44 people have lost their lives while 3140 people, half of them security personnel, have been injured.

As far as the state government is concerned, the surprising thing is that the whole media has been banned there.

"The fourth pillar of democracy is being stangulated. 12th day, the curfew is on. People are not getting ration, food products and medicine....What was the reason behind that no representative from the central government visited the Valley," he said.