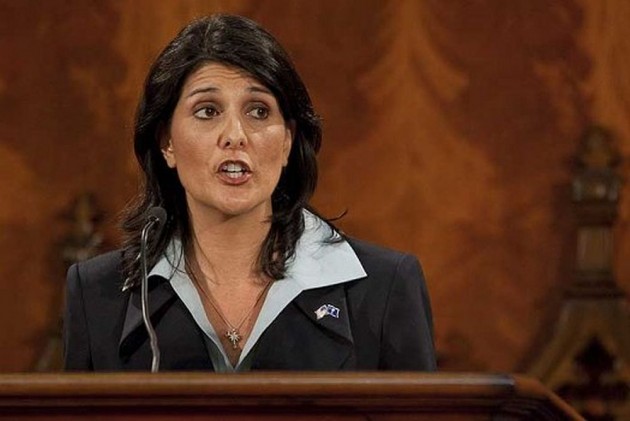 Indian-American Nikki Haley today pledged to stand up to Russia if approved as US' envoy to the UN and slammed the outgoing Obama administration for failing to block a Security Council resolution that condemned Israel's settlements in east Jerusalem and the West Bank.

"Russia is trying to show its muscle," Haley, 44, told the Senate Foreign Relations Committee during her confirmation hearing.

"We cannot trust them and need to continue to be cautious," the South Carolina Governor said, favouring continuing sanctions against Russia.

Haley reiterated her position against banning Muslims from entering the country.

"There is no need of any registry based on religion for American citizens," she said in response to a question.

"This administration and I don't think there should be any registry based on religion," she said.

"We should stand up to any country that interferes a with our system," she said on questions on alleged Russian interference into US elections.

She said she is aware of Russian hacking. But it is not the only country, she added.

Haley vowed to oppose anti-Israel efforts at the United Nations.

She was critical of the outgoing US President Barack Obama's decision to abstain from the UN Security Council resolution against Israel.

"It is very dangerous when the UN starts to tell what and what should not happen to two different parties...I will always stand with Israel," Haley said.

The South Carolina Governor said says "absolutely" supports the US moving its embassy in Israel from Tel Aviv to Jerusalem.

Her strong statement in this regard was welcomed by Israel.

Reflecting an aggressive foreign policy of the incoming Trump Administration, Haley threatened to pull out troops of the countries who do not hold them accountable for their alleged misdeeds at various peace keeping missions.

"We need to represent our country from a point of strength," Haley told lawmakers.

If confirmed by the US Senate, she would be the first Indian-American to hold a cabinet-level position in a presidential administration.

"The world wants to see a strong America,"she said, in response to a question, adding that is what the world is used to.

The United States, she asserted, needs to start showing its strength. She also insisted on building the American coalition and increasing its ally.

Responding to a question from Senator Robert Menendez, Haley said during her conversation with president-elect Donald Trump both Russia and China popped up in general nature and the challenges in their relationship.

Of the view that Beijing has a lot of leverage on

China has started to pull back economically, she said adding that the US should talk with in terms of them and tell that it is in their best interest to reign in North Korea.

Responding to a series of questions on reforms of the UN and its alleged anti-US actions, she said the United States is not only the major funder to the world body but also it hosts the United Nations.

The US needs to leverage its power over the world body, she said.

For instance, there are 16 peace keeping operations, some are successful, and some are not.

"We need to all of review them," she said, adding in some cases the UN peacekeeping missions are not getting co-operation from their own government.

Referring to the alleged misdeeds of some of the peacekeeping troops, Haley said the troop contributing countries need to take action against them.

If the UN pulls out all troops from such contributing countries that might be a big economic loss for them.

She identified Human Rights Council as another area of the UN in the need of reform.

She questioned the presence of countries like China and Cuba on the Human Rights Council, alleging that such nations are only protecting themselves.