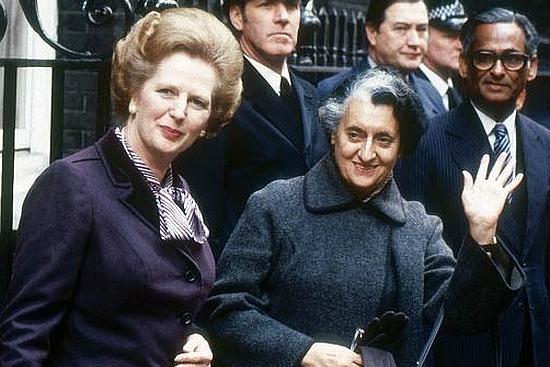 Former British Prime Minister Margaret Thatcher had received death threats to her life in the wake of Indira Gandhi's assassination in October 1984, according to newly-declassified UK government documents.

Thatcher, who described the former Indian Prime Minister as a "member of my own family", flew down to New Delhi to attend her funeral on November 3 that year against the backdrop of at least two documented threats to her life.

The British embassy in Helsinki had received a telephone call from a man with a "Middle Eastern or Asian accent" who said: "I have a feeling there is going to be an attack on Mrs Thatcher. I have never been wrong before," according to a telegram to the UK Foreign and Commonwealth Office (FCO) released under the 30-year declassification rule at the National Archives in Kew, south-west London.

A second telegram records a telephone communication between an anonymous caller and a French operator in Paris: "This is the IRA. Tell your security that we are sending a gunman to New Delhi and he will be a threat to Margaret Thatcher".

The threats would have assumed greater significance as Thatcher had survived an assassination attempt just weeks earlier when the separatist Irish Republican Army (IRA) exploded a bomb at the Conservative Party conference in Brighton on October 12, 1984.

The then UK foreign secretary, Geoffrey Howe, was understandably concerned and sent the following note to the British High Commission in New Delhi - "In addition to the need for stringent security for Princess Anne and the Prime Minister during their stay you will no doubt also be assessing the risk to High Commission staff and premises in Delhi".

He expressed concerns of a possible Sikh dimension to the threat, given that Gandhi's own Sikh security guards had been implicated in her murder.

"A further question arising in this context is whether there is any likelihood of Sikh locally engaged staff or others attempting to seek refuge in High Commission premises," he wrote to then high commissioner Robert Wade-Grey.

Thatcher, accompanied by Queen Elizabeth II's daughter Princess Anne, attended Gandhi's funeral in Delhi where she was asked by the media if the proceedings brought back her own assassination attempt.

She replied that her "thoughts had been only of Mrs Gandhi, who after the Brighton outrage had been one of the first to write a letter of sympathy to the British leader".

"This is a journey I had hoped not to make but the moment I heard the terrible news of Mrs Gandhi's assassination there was no doubt about it. I had to come," she added.

The close bond shared by the two world leaders is also reflected in her personal note to Gandhi's son and successor, Rajiv Gandhi, soon after the news of his mother's death broke.

She wrote, "I cannot describe to you my feelings at the news of the loss of your mother, except to say that it was like losing a member of my own family. Our many talks together had a closeness and mutual understanding which will always remain with me. She was not just a great statesman but a warm and caring person".

"I want you and Sonia to know how deeply Dennis (Thatcher's husband) and I feel for you both, for your whole family and for your country," she said.

Rajiv, who took over as acting Prime Minister, responded days later: "I was touched by your coming all the way to Delhi to share in our grief and sorrow. Your presence was a source of strength to us. I myself was profoundly moved by your words of comfort".

Indira Gandhi was assassinated by her Sikh bodyguards on October 31, 1984, in response to 'Operation Blue Star', the army raid on the Golden Temple to flush out terrorists.