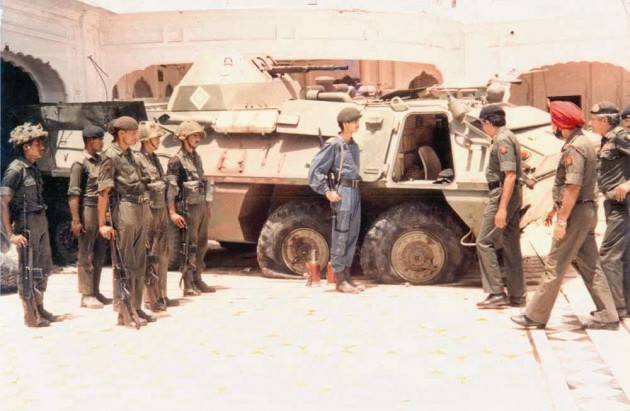 A British MP and a Sikh member of the House of Lords today claimed that top secret documents suggested Prime Minister Margaret Thatcher's government helped Indira Gandhi plan the storming of the Golden Temple in 1984 to flush out militants from the shrine, an operation that left more than 1,000 people dead.

Tom Watson, the Labour lawmaker from West Bromwich East, and Lord Indarjit Singh said the documents released under Britain's 30-year rule included "papers from Mrs Thatcher authorising the SAS (Special Air Service) to collude with the Indian government on the planning on the raid of the Golden Temple".

The government apparently "held back" some more documents and "I don't think that's going to wash", he told BBC Asian Network.

"I think British Sikhs and all those concerned about human rights will want to know exactly the extent of Britain's collusion with this period and this episode and will expect some answers from the Foreign Secretary," Watson said.

He wrote on his website that he would write to the Foreign Secretary and raise the issue in the House of Commons to get a "full explanation".

"But trying to hide what we did, not coming clean, I think would be a very grave error and I very much hope that the Foreign Secretary will...Reveal the documents that exist and give us an explanation to the House of Commons and to the country about the role of Britain at that very difficult time for Sikhism and Sikhs," he added.

On his website, Watson referred to documents that were made public by the organisation "Stop Deportations". The organisation said these documents were among a series of letters released at the New Year by the National Archives in London.

Lord Singh, also the director of the Network of Sikh Organisations in the UK, now wants the UK government to reveal the extent of British government involvement in both Houses of Parliament.

"These documents prove what Sikhs have suspected all along, that plans to invade the Golden Temple went back months even though the Indian government was claiming even weeks before that there were no such plans," Lord Singh told PTI.

"I have already approached the Indian government through the High Commission of India for the need of an independent international inquiry to establish the exact facts. I will now raise the issue in the House of Lords," he added.

Watson said: "I've only seen the documents this morning and am told there are others that have been withheld. This is not good enough. It is not unreasonable to ask for an explanation about the extent of British military collusion with the government of Indira Gandhi."

Five months after Operation Bluestar, Gandhi was assassinated by her Sikh bodyguards in retaliation for the raid on the Golden Temple.