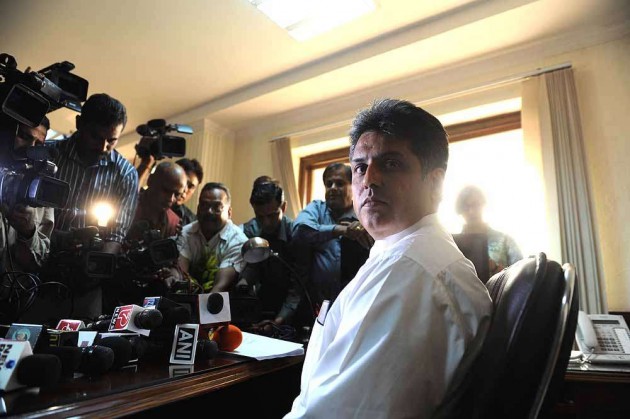 Reigniting the 2012 troop movement row, Congress leader Manish Tewari has termed as "unfortunate but true" a media report suggesting a coup attempt by General V K Singh, provoking a strong rebuttal by his own party and derisive denial by the former army chief.

Ruling BJP questioned the timing of the former Union minister's claim, but the latter stood firm on what he had said.

Replying to a question at a book release function here yesterday, Tewari virtually dug out the nearly four-year-old controversy from its grave, saying, "At that point of time I used to serve in the Standing Committee on Defence. And it's unfortunate but the story was true. Story was correct."

Tewari, who was Minister of State for Information and Broadcasting in the UPA government between October 2012 and May 2014, said, "I am not getting into an argument. All I am saying is that to the best of my knowledge that story was correct".

The Congress leader was asked about media coverage of issues pertaining to defence forces as in the case of the Indian Express report on April 4, 2012, titled "The January night Raisina Hill was spooked: Two key Army units moved towards Delhi without notifying Govt."

V K Singh, now Minister of State for External Affairs, dismissed Tewari's allegation saying it has come from a "person who has no work these days".

"He has no work these days. He should be asked to read my book which reveals everything (on the issue)," Singh said.

An embarrassed Congress, which had rejected the report when the controversy had erupted for the first time, dismissed Tewari's claim.

"I am again clarifying there is absolutely no truth in it (claims about troop movement in 2012). My colleague was neither a member of the Cabinet Committee on Security, nor any relevant decision making body," Congress spokesman Abhishek Singhvi said, adding some troop movements are necessary, "inbuilt and inevitable part of the defence mechanism".

"It was inappropriate, unnecessary and completely wrong to suggest that there was any truth in those allegations when made," he said.

"We on behalf of Congress very clearly and categorically want to deny this report," another party spokesperson P C Chacko said.

Isolated in his own party over his claim, Tewari said,"Whatever I said yesterday, I have nothing more to add or subtract."

According to The Indian Express report, central intelligence agencies had reported that on the night of January 16, 2012 there was an unexpected - and non-notified - movement by a key military unit from mechanised infantry based in Hisar in the direction of the capital.

On the same night, another unit - identified as a large element of the 50th Para Brigade based at Agra - had also been moved towards Delhi, according to the newspaper report.

It was on January 16, 2012 that Singh had approached the Supreme Court regarding the controversy over his date of birth, an issue which saw him locked in a bitter confrontation with the UPA government.

Questioning the timing of Tewari's remarks, the BJP demanded a statement from former Prime Minister Manmohan Singh and ex-Defence Minister A K Antony on the issue.

"Manish Tewari is raking up the issue wherein their own government had denied that there was any coup movement. His now raising this issue throws up many questions which must be answered by the Congress," party National General Secretary Siiddhartha Nath Singh said.

The timing is certainly politically "suspect", he said adding, "we have seen in past that Congress has tried to demoralise the armed forces by raising questions on national security."

"Therefore, it is time for Congress to come clean and BJP demands a statement from no one less than former Prime Minister Manmohan Singh and former Defence Minister A K Antony," he said.

Shekhar Gupta, who was the Editor-in-Chief of Indian Express when the story was published, reacting to Tewari's claim said though he would not comment on the war of words between political rivals," I don't believe that it (the news) needed further vindication, but yes anymore vindication is welcome.

"But more than vindication the debate is welcome because I think the system in India...The government...Has been in denial over what had happened because it was a very unpleasant thing that happened," he told NDTV.

Gupta said it was a "good thing" to have been brought up and that a "systemic correction" was needed so such situations do not recur.

Talking about the then Director General of Military Operations Lt Gen A K Choudhary, Gupta said,"Of course, he had said that the army contingents moving towards Delhi had no unterior motive and that these were routine exercises, which may be true.

"But the facts of the story have been confirmed for the first time by somebody who was on the political side in that government. I do hope that it will now be debated and I do hope this will not be seen in a politically partisan manner but in a systemic manner because whatever happened was a systemic flaw or was a systemic failing.

"A family knows if there was something wrong in a family, within a member of the family or with the family but everybody tries to hide it so that the neighbours don't get to know so there is an embarrasment. In the process, the flaw remains hidden.

"I think it was one of those things and frankly UPA was then in a very weak state of mind and this was seen by them as something much too embarassing or something probably which they thought if they admitted to have happened they would have had to respond to or take action on," Gupta said.

Infromation and Broadcasting Minister Ravi Shankar Prasad said army had already denied in 2012 that any such thing had happened. He also deprecated Tewari's action of speaking about what transpired in a Parliamentary committee meeting.

"I have been the I&B Minister before and after him (Tewari). There is an unwritten rule of Parliamentary etiquette. You don't disclose what is talked about inside a parliamentary committee," he said.

BJP leader Satpal Maharaj, who then headed the Standing Committee on Defence said,"I was the chairman of the committee then and wse came to know about this matter at that time.

"We were told that such army movements keep happening. You know that army keeps shifting from one place to other," he said.

Union Minister Mukhtar Abbas Naqvi, who was also on the panel, however, said he "doesn't remember" if the matter was discussed.

Maintaining that discussions of Parliamentary committees should not be brought into the public domain, Naqvi said the army had "already clarified" the matter.

"I don't know from where he (Tewari) got this dream. The army had already clarified about it and the matter was over at that time itself," he said.

CPI(M) politburo member Brinda Karat said,"The question remains that the then government had at that time totally denied it. So, if there was a truth in it, why it was denied then? So, they are also answerable to the country."