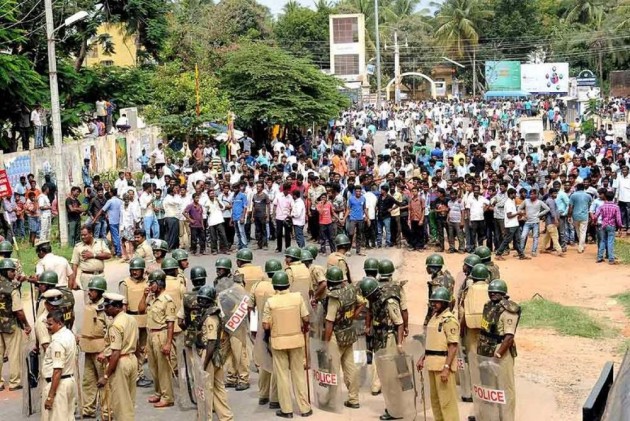 More than 100 people, including Telugu actor Sampoornesh Babu, were today detained by police here ahead of their proposed silent protest called for demanding special category status (SCS) to Andhra Pradesh.

The protestors gave a call on Facebook and other social media platforms for a Jallikattu-style protest on the iconic Ramakrishna Beach here.

To foil the proposed "silent beach protest", police yesterday imposed Section 144 of CrPc in the coastal city, banning any assembly of five or more people in an area.

Police Commissioner T Yoganand warned they would arrest even Leader of Opposition Y S Jaganmohan Reddy if he attempted to undertake any protest in violation of the prohibitory orders.

"Nobody has sought permission for the protest and in any case permission cannot be granted for such agitations," DGP (in-charge) Nanduri Sambasiva Rao said yesterday.

A heavy posse of police and armed security personnel has been posted on the beach while roads leading to it have been sealed.

Filmstar and Jana Sena chief Pawan Kalyan was the first to lend support to the youths' call for a stir on the lines of Jallikattu movement (held on Chennai's Marina Beach) even as Jagan called for a candle light protest.

The YSR Congress President said he would take part in the protest.

Sampoornesh arrived in the city today to take part in the protest but was detained along with 100 youths, police said.

Chief Minister Chandrababu Naidu termed the protest as an attempt to scuttle the Partnership Summit slated to be held here on January 27 and 28.

He appealed to parents to restrain their children from taking part in such futile agitations.

Even since Andhra Pradesh was bifurcated in 2014 there have been demands from political parties for special category status to the State so as to fast-track its development.

In September last year, the Centre announced a special financial package for AP with an aim to make up for the revenue loss suffered by it after the creation of Telangana but stopped short of giving the state a special category status.

The package included full funding of Pollavaram irrigation project, tax concessions and a special assistance for the State.