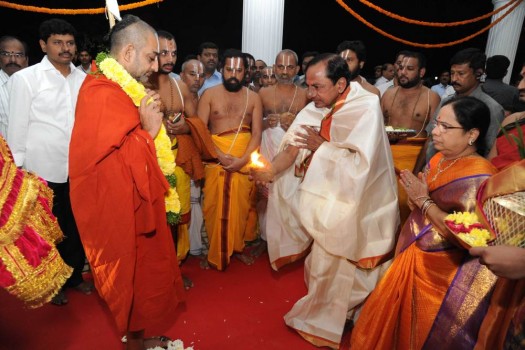 In a princely offering, Telangana Chief Minister K Chandrasekhar Rao today donated gold ornaments worth around Rs 5 crore to the famous hill shrine of Lord Venkateswara in nearby Tirumala.

Accompanied by family members and some cabinet colleagues, Rao arrived here last night by a special flight on a 15-hour maiden spiritual visit to the ancient temple.

It was the first of such huge offering ever made by a state government after Independence in the country, to the 2,000-year-old hill shrine, richest in the world, the sources said.

Later, at the sprawling Ranganayaka Mandapam inside shrine, Rao was honoured with sacred silk cloth and prasadam while the high priests, amid chanting vedic hymns, bestowed blessings on him.

Before leaving for Hyderabad, Rao also offered his obeisance and made a gold offering at the shrine of Sri Padmavathi in Tiruchanur near here, the sources added.

In a brief chat with mediapersons outside the shrine, Rao said he came to the shrine to offer prayers and make the offerings as well to Lord Venkateswara as a fulfillment of his vow.