Tejashwi Yadav Needs To Come Out Clean, We Cannot Compromise With Our Principles, Says JD(U) 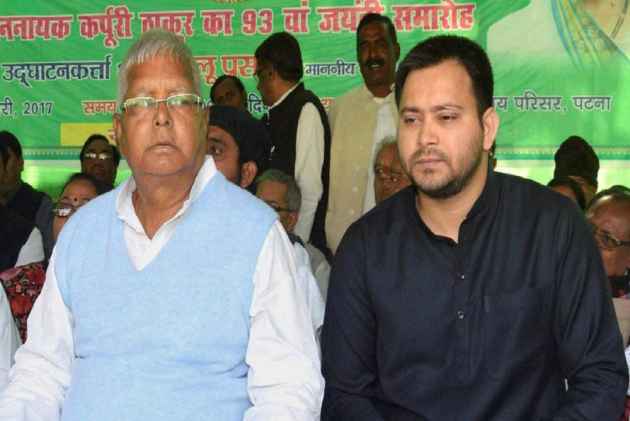 Print
A
A
A
increase text size
Outlook July 12, 2017 12:26 IST Tejashwi Yadav Needs To Come Out Clean, We Cannot Compromise With Our Principles, Says JD(U)

Asserting that Lalu Prasad's son and deputy chief minister Tejashwi Yadav needs to come out clean with regards to a corruption case filed by the Central Bureau of Investigation (CBI), the Janata Dal (United) on Wednesday said the party wouldn't compromise with its principles and a decision would be taken accordingly.

"We are in a mahagathbandhan, but to maintain the coalition, the responsibility falls on everyone. Hence, he needs to come out clean on the FIR filed by the CBI. We cannot sit silently and the JDU will cannot comprise its principles. We will take our decision accordingly," JD(U) leader Ajay Alok told ANI.

The 'mahagathbandhan' of the Rashtriya Janata Dal (RJD) and the JD(U) is going through rough waters after the CBI filed corruption charges against Tejashwi Yadav in hotel tender case. There has been an increasing demand over his resignation.

In lieu of this, Bihar Chief Minister Nitish Kumar had called the national and state lawmakers of his party for a meeting in Patna on Tuesday.

After the meeting, sources said that the party decided to give more time to Tejashwi Yadav.

The RJD supremo, however, refuted the allegations against him and called it a political conspiracy hatched by the BJP.

Earlier on Friday, the CBI registered a corruption case against Lalu Yadav, his wife Rabri Devi, son Tejashwi Yadav; former Indian Railway Catering and Tourism Corporation (IRCTC) Managing Director P.K. Goyal; and the wife of Lalu's confidante Prem Chand Gupta, Sujata on allegations of awarding the tender for development, maintenance and operation of hotels in Ranchi and Puri in 2006.

The case was registered on the allegations of awarding the tender for development, maintenance and operation of hotels at Ranchi and Puri to a private company dealing with hotels in the year 2006.

The investigative agency also conducted searches at 12 locations across Patna, Delhi, Gurugram and other places.