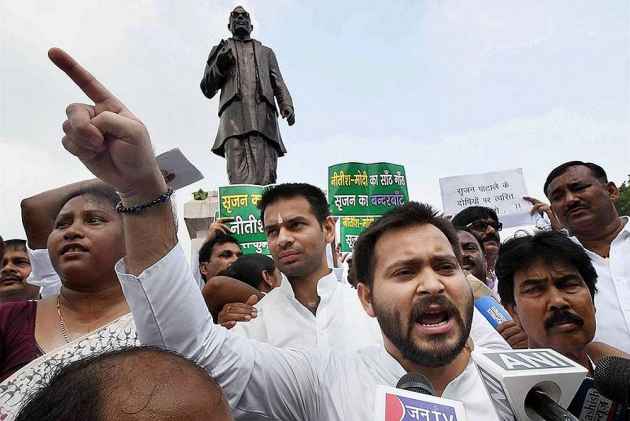 Leader of Opposition in the Bihar Assembly Tejashwi Prasad Yadav today demanded the resignation of Chief Minister Nitish Kumar and his deputy Sushil Kumar Modi in connection with an alleged scam, involving an NGO.

Tejashwi, who drew the attention of Speaker Vijay Kumar Chaudhary to the adjournment notice given by the Rashtriya Janata Dal (RJD) MLAs on the "scam", frequently used the expression, "khajana chor" (treasury thief), to describe the chief minister and the deputy chief minister.

At one point, when the speaker told him to raise the issue at an appropriate time, when the notice would be taken up and the government would give its reply, Tejashwi, amid slogan-shouting by RJD and Congress legislators, was heard saying, "What reply would come from the khajana chor."

While the chief minister was not present in the House as he was on a tour of the flood-hit areas of Kisanganj, Araria and Katihar, Deputy Chief Minister Modi was present.

The BJP leader hoped that the speaker would expunge the remarks of Tejashwi from the Assembly records.

State minister and senior BJP leader Nand Kishore Yadav said, "Those involved in corruption cases should have some shame before making such comments."

Later, talking to reporters, Modi hoped that the speaker, while going through the proceedings of the day, would himself order the deletion of the words ("khajana chor").

The deputy chief minister claimed that Tejashwi's "anger" was due to the "frustration over power slipping out of his hands in a short period of 18 months".

Tejashwi (27), the son of RJD supremo Lalu Prasad, was elected as an MLA for the first time in 2015, along with his elder brother Tej Pratap Yadav. He was the deputy chief minister in the erstwhile Grand Alliance government in Bihar, led by Kumar.

Modi, a contemporary of Lalu, told reporters, "He (Tejashwi) is a child and has to learn a lot in politics."

K C Tyagi, the principal general secretary of the JD(U), said, "Using such words for people who are double his (Tejashwi's) age is not good. He should have used proper words instead."