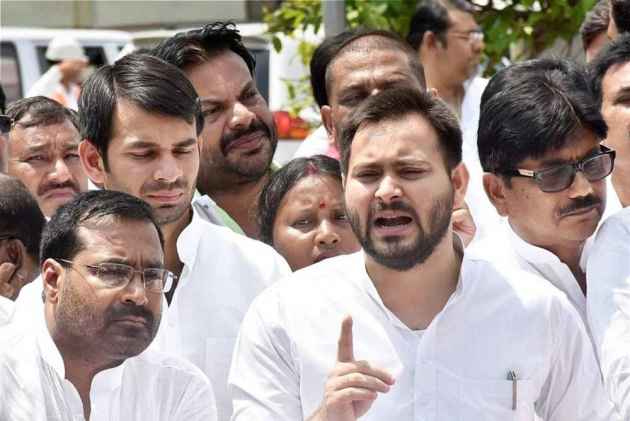 The former deputy chief minister, accompanied by his brother Tej Pratap Yadav, state RJD chief Ramchandra Purbe and other leaders, sat quietly for about one hour under statue of father of the nation at Gandhi maidan in Motihari to seek an apology from him.

"We sought apology from Mahatama Gandhi for being under leadership of a person (Kumar) who ditched everybody and went with the RSS which killed Bapu," Tejashwi Yadav told reporters at the site.

Tejashwi Yadav is leading the RJD's "Janadesh Apman Yatra" (insult to mandate yatra) to protest Kumar dumping grand alliance of the JD(U), the RJD and the Congress and joining hands with the BJP to form a new government in Bihar.

The yatra is also aimed at mobilising support for the RJD's August 27 rally at Patna.

Tejashwi Yadav said the reason for apology was that he had earlier sat under the same statue with Nitish Kumar at a function to celebrate centenary celebration of Champaran Satyagraha and also walked with him to urge people to follow ideals of the father of the nation.

In Patna, Tejashwi Yadav's father and RJD supremo Lalu Prasad once again described Kumar as "Paltu Ram" (turncoat) to highlight his walking out of grand alliance and going with the BJP.

Prasad told reporters that he apprehends some JD(U) workers would disguise among public to attack senior JD(U) leader Sharad Yadav with water bottles, chappals when he arrives here tomorrow to start his three-day tour programme of direct dialogue with people reportedly against party decision to walk out of grand alliance and side with the BJP.

Addressing a rally at Madhopur on border of East and West Champaran, Tejashwi Yadav alleged that Nitish Kumar with the help of BJP president Amit Shah was targeting his family by getting cases foisted against them.

"He (Kumar) has gone with those who questioned his DNA," he said to highlight Prime Minister's speech during Bihar poll in 2015 against Kumar.

He also reiterated that Kumar found an "excuse" in him to disintegrate grand alliance and forge ties with the BJP.

Meanwhile, the JD (U) took potshots at Tejashwi Yadav's yatra.

"It would have been better if he had started 'Kanoon Samman yatra' (campaign to honour laws) to answer charges of graft with facts," JD(U) spokesman Neeraj Kumar said.

"As an accused in corruption case he (Tejashwi Yadav) has sullied his face in youths itself," Neeraj Kumar said.

Another JD(U) spokesman Nikhil Mandal said "it would have been better if he (Tejashwi Yadav) tendered apology to Mahatama Gandhi for indulging in scam."