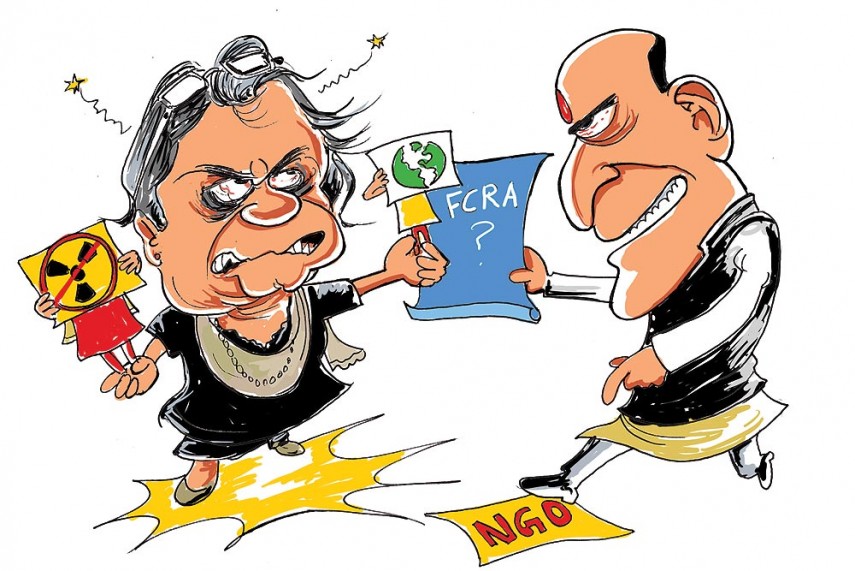 An NGO run by civil rights activist Teesta Stelvad, who has espoused the cause of Gujarat riot victims, was today banned from receiving foreign funds, with the Home Ministry cancelling its FCRA licence.

The Home Ministry issued an order saying that the central government has cancelled the permanent registration of Sabrang Trust run by Teesta and her husband Javed Anand with immediate effect.

The government argued that the foreign funds received by the NGO under the Foreign Contribution Regulation Act (FCRA) licence had not been used for the purposes meant.

The order said that during inspection, the Home Ministry found that foreign contribution has been "frequently used" for items of "personal expenses e.G. For dining in hotels, food takeaways ordered at their residences, cakes and sweets from premium outlets, purchase of purely personal items like ear-buds, wet wipes, clippers, sanitary napkins by both Teesta and Anand, which have been reimbursed to the trustees from FCRA account."

Sabrang Trust has spent an amount of Rs 50 lakh for Sabrang Communications & Publishing Pvt Limited (SCPPL), of which Teesta and Anand are working as directors, co-editors, printers and publisher, "clearly violating the mandate of the FCRA," the MHA order said.

"By this action, the NGO has not only unauthorisedly utilised the foreign contribution for the purposes of an unregistered entity but also that entity being a self-owned media and publication company, utilised that amount for activities totally prohibited by FCRA," it added.

The order said the NGO had transferred an amount of Rs 2.46 lakh from its foreign contribution designated account to Sabrang Trust domestic account, thus mixing of domestic and foreign funds and violating the rules.

Sabrang Trust has made direct payments of approximately Rs 12 lakh from FCRA designated account to Citi Bank and Union Bank of India on account of credit cards belonging to Teesta and Anand respectively.

The cards are issued in the name of the individuals and the above payments of the foreign contribution shall be treated to have been used for personal gain, the Home Ministry said.

A report in a daily newspaper today alleged that Prasad not only told a witness the questions he would ask but also suggested to him what answers he should give --that he had not seen any of the missing documents.

Chidambaram said the news report completely vindicated the position that he had taken on the two affidavits in the Ishrat Jahan case.

Nineteen-year-old Ishrat Jahan and three others were killed in an alleged fake encounter on the outskirts of Ahmedabad involving the city police on June 15, 2004.

The first affidavit (August 6, 2009) disclosed the "intelligence inputs" that had been shared by the central government with the state government.

Chidambaram said Judge S P Tamang in his report (September 7, 2009) found that Ishrat Jahan and three others had been killed in a "fake encounter".

"The report caused an uproar in Gujarat and elsewhere.The first affidavit was misinterpreted and misused to defend the encounter. It was, therefore, necessary to clarify the first affidavit.

"Hence, a 'further affidavit' was filed on September 29, 2009) clarifying that intelligence inputs 'do not constitute conclusive proof and it is for the state government and the state police to act on such inputs'," he said.

Congress spokesman Anand Sharma alleged that the government was preparing a "doctored" report on the missing files in the Ishrat case.

This "fixing" was the work of the "dirty tricks department" of the government which is coordinated by the PMO, he told reporters in Delhi.

"The investigation has been 'fixed'. This was simply a show. The nation has to realise now we have a dirty tricks department coordinated by PMO," he said claiming that the whole attempt is to "deflect and divert" attention from issues before the Gujarat High Court in the case.

The BJP said the officer at the centre of the row has also issued a statement rejecting the charge of tutoring and pointed out that it was admitted by former home secretary G K Pillai that some files had gone missing.

"Unfortunately Congress feels that one of the newspapers has given them another springboard to prove that Ishrat Jahan had no LeT link. It does not absolve Chidambaram's role on changing the affidavit amd Congress' trade-off between national security and political interest," its national secretary Sidharth Singh told reporters.

"I hotly deny tutoring of witnesses. Files in the Home Ministry are never lost. They might get misplaced. But I am confident they will be located somewhere. The file (is) in Home Ministry," Mehrishi told reporters in Mumbai.