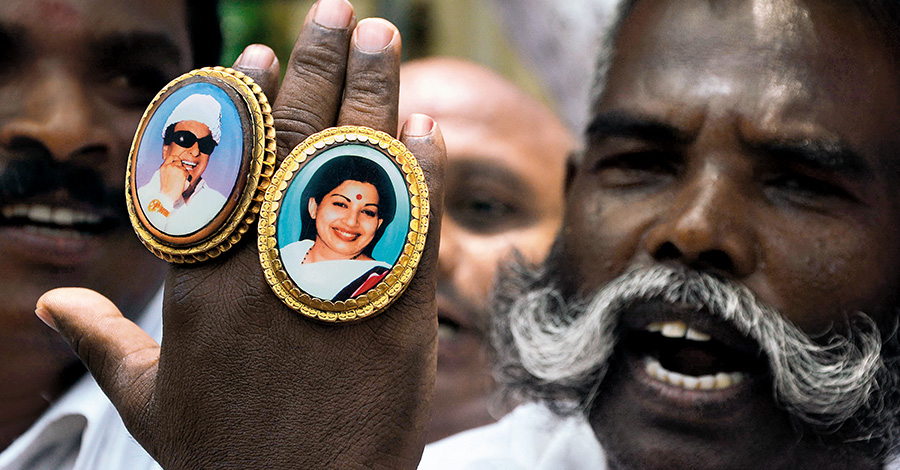 AIADMK General Secretary V K Sasikala and Chief Minister O Panneerselvam were at the forefront of the birth centenary celebrations of their party founder, the late M G Ramachandran today.

Sasikala led the celebrations at the party headquarters here where she garlanded a statue of Ramachandran, a former matinee idol who later went on to become the Chief Minister of Tamil Nadu, and also released a souvenir.

She gave away welfare assistance to many persons.

In the presence of Panneerselvam, Lok Sabha Deputy Speaker M Thambidurai and others, she unfurled the party flag there and also unveiled a life-sized statue of MGR, as Ramachandran is fondly addressed.

Sasikala later visited a school for speech disabled and hearing impaired children run by MGR's family and gave away hearing aid to children.

Later, she served food and also shared a meal with the children there.

Meanwhile, Panneerselvam paid floral tributes to a portrait of MGR at Guindy with his cabinet colleagues in tow.

At an official function, a postage stamp was also released to mark the birth centenary of MGR.

The Chief Minister and Sasikala had earlier urged Prime Minister Narendra Modi to release a special postage stamp and commemorative coin in honour of Ramachandran, who is also a Bharat Ratna recipient.

A charismatic superstar, MGR is a legendary name in Tamil cinema. He made a name in state politics after he broke away from the DMK following differences with its chief M Karunanidhi and founded AIADMK in 1972.

Known for his flamboyant acting and songs preaching values and virtues, Ramachandran ruled the state from 1977 till his death in 1987.

His birth centenary was celebrated across the state even as leaders from other parties including DMK Working President M K Stalin, MDMK Leader Vaiko and BJP state President Tamilisai Sounderrajan paid rich tributes to the leader.

Continue FREE with Ads Pay Rs. 1 to Read Without Ads
READ MORE IN:
National
Next Story : 'Disparities Have Increased Significantly In The Last Decade,' Says Sunil Mittal At The WEF
Download the Outlook ​Magazines App. Six magazines, wherever you go! Play Store and App Store