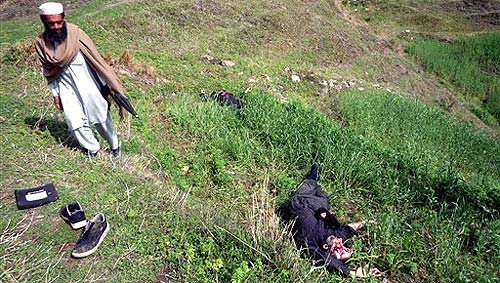 A tribesman walks past a police officer's dead body who died in clashes with a group of Pakistani Taliban fighters who crossed from Swat into Buner district.

The Pakistani Taliban have begun enforcing Islamic law in the Bajaur tribal region even as scores of militants consolidated their hold on Buner district, located just 100 km from the federal capital.

Maulvi Faqir Mohammad, the militant commander in Bajaur Agency and a deputy of Tehrik-e-Taliban Pakistan chief Baitullah Mehsud, announced the decision to enforce Shariah in the region during a broadcast on his illegal FM radio station.

During a 40-minute speech on radio, Mohammad said that he and his fighters would spare no effort to strictly implement Islamic laws in the region. The Taliban have formed an 'action group' to ensure the enforcement of Shariah and to punish people who violate their edicts.

Mohammad barred women from stepping out of their homes without male relatives, banned shaving of beards and warned people against availing assistance from the Benazir Income Support Programme, a government project to provide financial aid to women. He said that shaving of beards and men not wearing skull caps are "practices of Jews and their followers" which the Taliban would not allow in Bajaur.

Meanwhile, scores of Taliban fighters from Swat who entered Buner district, have begun consolidating their hold on the region and taking control of more areas, including the shrine of Sufi saint Pir Baba.

Earlier, following peace talks with a tribal jirga, the militants had announced that they would pull out of Buner. The security forces offered no resistance as the militants took over more areas.

"They have taken control of vast areas in Buner. They are freely moving around while police and other law enforcement personnel remain confined to their posts," said a man who lives near the shrine of Pir Baba. He said that the militants had earlier announced that they would leave after holding a march in the area.

Local residents said that the militants had occupied the homes of influential people organising an anti-Taliban lashkar or militia and were patrolling the road leading to Daggar, the headquarters of Buner district.

Militants set on fire TV sets, pictures and paintings and audio and video cassettes before Friday prayers. They locked the shrine of Pir Baba and stopped followers of the saint from visiting the site.