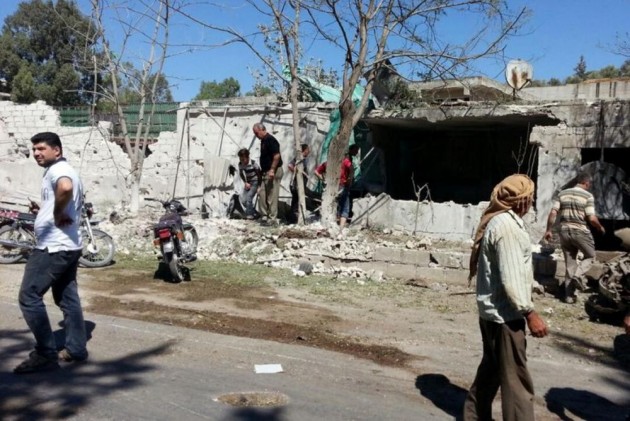 Government forces have retaken a third of rebel-held territory in Aleppo, forcing nearly 10,000 civilians to flee as they pressed their offensive to retake Syria's second city.

In a major breakthrough in the push to retake the whole city, regime forces captured six rebel-held districts of eastern Aleppo over the weekend, including Masaken Hanano, the biggest of those in eastern Aleppo.

Yesterday, the 13th day of the operation, they also took control of the adjacent neighbourhoods of Jabal Badra and Baadeeen and captured three others, the Syrian Observatory for Human Rights said.

Inzarat, Al-Sakan al-Shaabi and Ain al-Tall have all returned to regime hands and government forces have made large forays into Sakhur and nearby Haidariya, the monitor said.

It said government forces are "in control of most of the northern part" of Aleppo.

"The rebels have lost at least 30 percent of the territory they once controlled in Aleppo," Observatory chief Rami Abdel Rahman said.

The regime gains came as its aircraft pounded rebel positions and amid heavy clashes between the opposition and forces loyal to President Bashar al-Assad in the strategic Sakhur district.

Masaken Hanano was the first district the rebels took in the summer of 2012 in a move that divided the city into a rebel-held east and a regime-controlled west.

Around 250,000 civilians besieged for months in the east have faced serious food and fuel shortages.

The Observatory said that nearly 10,000 civilians had fled east Aleppo overnight Saturday -- at least 6,000 to the Kurdish-controlled northern district of Sheikh Maksoud, with the rest fleeing to government-held areas.

"It is the first exodus of this kind from east Aleppo since 2012," Abdel Rahman said.

Syrian state television broadcast images of a crowd of civilians including women and children gathered around green buses that it said had come to pick them up in Masaken Hanano.

One woman was shown pushing a stroller and many others carried plastic bags on their heads as bombardment was heard in the distance.

Official media said they were taken "by the army to safe areas".

Sakhur lies on a stretch of just 1.5 kilometres between west Aleppo and Masaken Hanano, now both regime-controlled.

If the regime takes control of Sakhur, east Aleppo would be split in two from north to south, dealing a further blow to the armed opposition.

The latest regime push comes after days of intense bombardment on the east, which has been pounded with air strikes, shelling and barrel bombs.

On Saturday, dozens of families fled Sakhur and Haidariya as regime raids and artillery killed at least 18 civilians in several districts, the Britain-based Observatory said.

At least 225 civilians, including 27 children, have been killed since the government's latest assault on east Aleppo began on November 15.