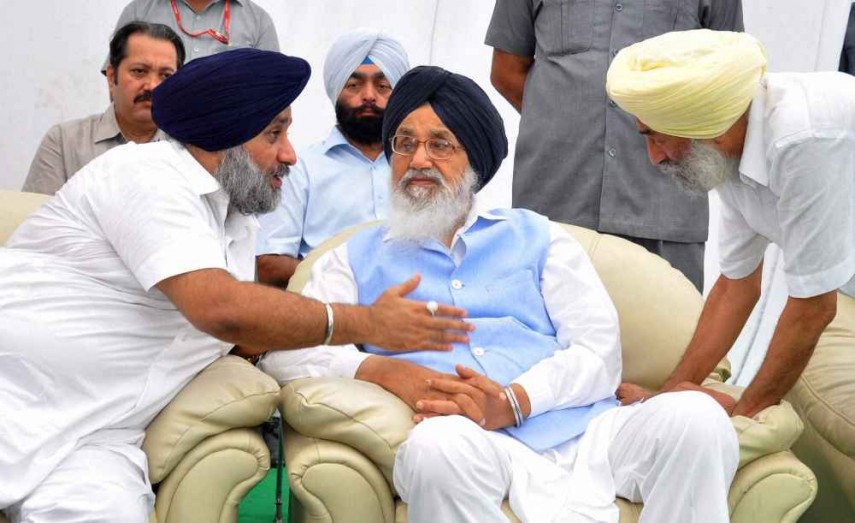 Ruling SAD today called an "emergency meeting" after Punjab suffered a serious setback with the Supreme Court holding as "unconstitutional" the 2004 law passed by it to terminate the Sutlej-Yamuna Link (SYL) canal water sharing agreement with neighbouring states.

The party's alliance partner in Punjab, BJP, also toed the SAD line after the apex court's verdict. The BJP said, "Punjab does not have any surplus water to share with any other state."

"An emergency meeting of the Punjab Cabinet to discuss issues pertaining to the SYL canal (water sharing) verdict has been summoned here this evening," Chief Minister Parkash Singh Badal said.

"Everything will be decided either in the (SAD) Core Committee or the Cabinet meeting," he told reporters declining to make any further comment on the issue.

Badal dubbed the resignation of Punjab Congress chief Amarinder Singh as MP and his party's MLAs decision to follow the suit in the wake of the Supreme Court's verdict as "mere drama".

"His resignation and that of others is a drama. Assembly polls are due in two months. Won't they contest the next election. It is just a drama," he alleged.

The Supreme Court's verdict comes at a crucial juncture with Punjab going to polls early next year. The contentious issue is likely to have political ramifications.

Punjab BJP leader Vineet Joshi said, "We are not against giving water to Haryana or any other state of India, but the issue is Punjab does not have the surplus water to share. We cannot give water at the cost of our farmers."

The apex court judgment termed the Punjab Termination of Agreements Act, 2004 as "unconstitutional" and said Punjab could not have taken a "unilateral" decision to terminate the water sharing agreement with Haryana, Himachal Pradesh, Rajasthan, Jammu and Kashmir, Delhi and Chandigarh.

"Let there be elections in December," Singh said after sending his resignation from the Amritsar Lok Sabha seat to the Speaker in the wake of the Supreme Court judgement, favouring Haryana in the Sutlej-Yamuna Canal link case.

"We will go to the people over this issue," he said in a statement, adding, "Having failed to safeguard the interests of the people of Punjab, Badal will now try to cause trouble, and so, the sooner he is out of power, the better for the state."

The already fragile situation in the state has been aggravated as a result of this development and is ripe for mischievous elements to whip up trouble, he claimed, adding that terrorist groups from across the border could exploit the situation to create mayhem in the poll-bound state.

"To avoid this, the state should be immediately placed under the Governor's rule and elections should be held by December," he said.

Stating that the Akalis had 10 years to resolve the SYL issue, which they failed to address, Singh added, "It is too late for them to be thinking of ways and means to wriggle out of the situation that is of their own making."

He said that during its decade-long rule, the Badal government should have fought the case effectively and should have battled for the implementation of the riparian principles of water sharing.

"Haryana has no riparian rights on Satluj River, just as Punjab has no such rights on Yamuna river water.

"Had the Badal government fought the case properly, keeping Punjab's interests in view, the situation might have been different today," he said.

Earlier in Fatehgarh Sahib, Punjab Deputy Chief Minister Sukhbir Singh Badal said, "Come what may, we will not allow even a single drop of precious river water of Punjab to go outside the state."

"Only the SAD-BJP government took special care of interests of all sections of the society," he alleged.

"Amarinder Singh had welcomed the then prime minister Indira Gandhi when she came to lay the foundation of the SYL canal at Kapoori," he claimed, adding now, Amarinder is indulging in "theatrics" eyeing next year's assembly polls.

On AAP, Sukhbir said, "How can AAP be trusted. Its convener Arvind Kejriwal spoke in favour of protecting interests of farmers in Punjab on SYL issue but the moment he returned to Delhi he started singing peans in favour of constructing the SYL canal."