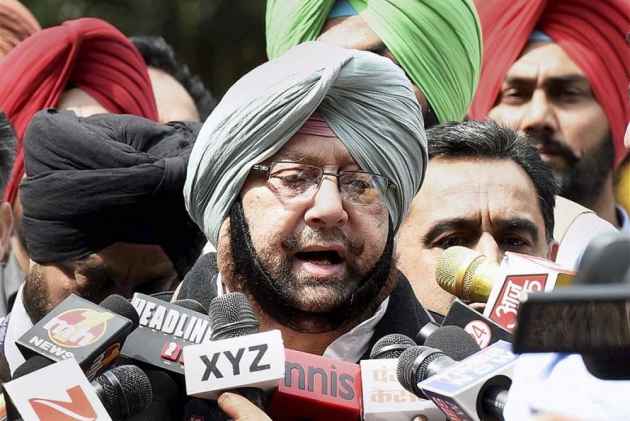 Punjab Chief Minsiter Captain Amarinder Singh on Monday warned that if the final verdict on Sutlej Yamuna link canal (SYL) deprives the people of Punjab of their water rights, it could lead to the revival of militancy in the region.

"Amarinder rahe na rahe, SYL will become a national problem if the final judgement goes against Punjab. Any move to deprive the people of the state of their water rights could lead to the revival of militancy in the region," Capt. Amarinder said firmly.

He said that he had requested Union Home Minister Rajnath Singh to start negotiations on the SYL issue through the Water Resources Department in the interest of Punjab's and India's peace and stability.

"Punjab would be pushed back to its dark days of terrorism if the SYL resolution does not address the state's concerns. Any such negative development could lead to a major crisis in the state," he said.

He further added that all the extremist movements in the state, including the Khalistani, Naxalite and Mujhaira movements, had started from southern Punjab, which would be the worst affected by the construction of SYL canal.

Blaming the Akalis squarely for plunging the state into this catastrophic situation, Amarinder said they had been responsible for depriving Punjab of its natural resources, which were diverted to Himachal Pradesh and Haryana after the division of the state.

"Haryana got more water despite having less land, while Punjab did not get any share of water from river Yamuna. The root of the problem could be traced to the state's partition and the lopsided allocation of its resources at that time," he said.

He pointed out the Punjab has no water to nourish and irrigate its own land and added that with less than 25% irrigation through surface water, agriculture in the state had become unviable.

Promising to make farming remunerative again for the state's farmers, he said that his government was working on several initiatives to facilitate diversification and bring in a new green revolution, not just with wheat and paddy but with other crops.

Recalling the `farm to fork' project, which he had launched with Reliance during his earlier chief ministerial tenure, the Punjab Chief Minister reiterated his commitment to bring the farmers of the state out of the abyss into which they had been plunged in the last 10 years of the SAD-BJP mismanagement and misrule.

Earlier in May, the Apex court had heard the Sutlej Yamuna Link (SYL) Canal matter.

The final hearing was put off after the Centre informed the court that a meeting of Punjab and Haryana has been convened by it on April 20 to resolve the matter.

The court, however, made it clear that if a solution was not found, it would proceed with the matter on the next date of hearing.

The bench, also comprising of Justice Amitava Roy, considered the statement of Solicitor General, Ranjeet Kumar and deferred the hearing in the case.

The apex court refused to hear the Punjab Government's plea to adjourn the SYL Canal matter till the election results were announced and posted the matter for further hearing till February 22.

A bench headed by Justice Pinaki Chandra Ghosh refused the plea and asked, "What has the Supreme Court to do with the election results?"

In January, the apex court asked both the Haryana and Punjab Governments to file their replies on the issue within three weeks.

The Punjab Government had earlier sought more time from the court to file a detailed reply on the same.

A bench of the court headed by Justice Ghosh and Justice Amitava Roy granted the decision.

The apex court had, in November last year, termed the law passed by the Punjab Government in 2004 to terminate the SYL Canal water sharing agreement with neighbouring states as 'unconstitutional'.

Holding that the Punjab Termination of Agreement Act, 2004 was not being in conformity with the provisions of the Constitution, the top court answered in the negative to all four questions referred to it in a presidential reference.

A constitution bench of the court ruled that Punjab could not and should not have taken a 'unilateral' decision to terminate the agreement with Haryana, Himachal Pradesh, Rajasthan, Jammu and Kashmir, Delhi and Chandigarh to share the Ravi-Beas river waters.