SYL Row: All Party Delegation To Call On President, PM 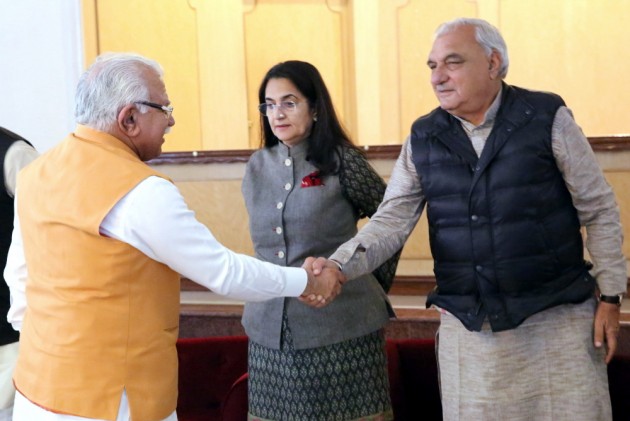 Print
A
A
A
increase text size
Outlook November 20, 2016 20:52 IST SYL Row: All Party Delegation To Call On President, PM

Haryana Chief Minister Manohar Lal Khattar today said an all-party delegation would soon call on the President and the Prime Minister to press for the early implementation of the Supreme Court's decision on the Sutlej-Yamauna Link (SYL) Canal issue.

Congratulating the people on the favourable verdict, he said the state would soon get water from the SYL Canal.

Addressing a public meeting after inaugurating development projects worth Rs 42 crore in Jhajjar district's Beri, he said the state government had made arrangements to ensure that the irrigation water reached right up to the tail-ends in southern Haryana and schemes worth Rs 2,500 crore have been approved in this regard.

He said the present BJP government in the state had made concerted efforts in the last two years in the issue, which has been pending for about 36 years, as a result of which the apex court gave its decision in the interest of Haryana.

The Chief Minister announced that a women's college would be opened at Beri. He also agreed to other demands of the locals, including those related to roads, irrigation water, education and infrastructure.

Khattar said he was the first Chief Minister to have decided to visit all the 90 Assembly segments in the state in the first two years of formation of the government.

"This is the 80th segment where I'm making announcements for development of the area. A sum of Rs 141 crore has already been spent on various development projects during the last two years in Beri. I would cover all the 90 Assembly segements by December," he added.

Hailing the decision of demonetisation, the Chief Minister claimed that the common man had begun to realise that the black money had started coming out and it was the reason about 86 per cent people of the country were in its favour, according to a survey.

A new path of development would be opened with the money coming to the government treasury, he added.

The Chief Minister said though a lot of success had been achieved in making Haryana a corruption-free state but a lot remained to be done in this direction. Government jobs are being given in a transparent manner and investment worth about Rs 7 lakh crore is expected in the state, he added.

He highlighted the various schemes and programmes being implemented in the state, including gas connection for the poor, increase in the Old Age Samman Allowance and other pensions and the Beti Bachao-Beti Badhao programme. More Speaking on the occasion, Union Minister Birender Singh,

said during the 45 years of his political career, he has seen many Prime Ministers "but it is the vision of Narendra Modi which will take the country to new heights".

Referring to demonitisation, Singh said 86 per cent of the currency was in the form of high-value notes, of which only 30 per cent was available in the market and the rest was black money.

Now, with this decision of the Prime Minister, the government would get back black money worth about Rs 9 lakh crore which would be utilised for developmental activities.

Agriculture and Farmers' Welfare Minister Om Prakash Dhankar said it was the PM's farsightedness to ensure that every person became part of development of the country.

The Prime Minister is working to strengthen the economy of the country. Haryana--the land of Gita--has been scaling new heights of development for the last two years, he said.