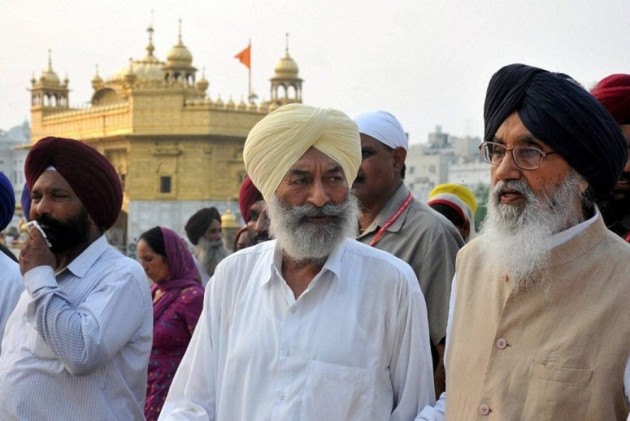 Punjab Congress workers today burnt effigies of Prime Minister Narendra Modi and Chief Minister Parkash Singh Badal across the state accusing them of failing to protect the interest of Punjab on the water sharing issue.

They charged the SAD leadership in Punjab and the BJP's at the Centre with "furthering their own vested interests" at the cost of the interests of the people.

They burnt the effigies and shouted slogans against them in all 117 Assembly constituencies.

Leader of Opposition in Ludhiana Municipal Corporation Hemraj Aggarwal was also present at the protest with his supporters. The Badal government has failed to properly defend the SYL case in the apex court, they said.

Similarly, protests were also held in other parts of the state.

At all these programmes, party leaders exhorted the Congress workers to go to the people over the issue and garner public support in an effort to ensure two-thirds majority for the party in the upcoming Assembly election.

Armed with majority, the Congress will bring in a new legislation in the House to ensure the "water-deprived" people of Punjab are not exposed to further hardship, they said.

The party has already announced the next course of action on the issue, with a major rally planned for Sunday at Abohar, the tail-end of the SYL canal.

The party will organise a protest rally at Khuian Sarwar village on the Abohar-Ganganagar Main Highway Road, some 15 km from Abohar.

Khuian Sarwar, a village in Fazilka district and also a block (sub-tehsil) within the Abohar tehsil, is the area that will be the worst affected if the Supreme Court's decision on SYL is implemented, party leaders said.

According to Punjab Pradesh Congress Committee (PPCC) vice president Sunil Jakhar, Congress leaders and workers from across the state, joined by several central party leaders, will participate in the rally.

State party president Amarinder Singh will lead the show of strength against the Akali "mishandling" of the SYL case, he added. MORE Other senior leaders expected to attend the rally include

The CLP had on Friday, at a meeting decided to organise the rally.

The Punjab Congress has also sought a meeting with the President to apprise him of the problems people of Punjab will face as a result of the court's verdict.

Arguing that the SYL verdict would seriously affect the lives of people in Punjab, the Congress has demanded the formation of another tribunal to assess the amount of water to which the state currently has access.

The Congress leaders reiterated that under the riparian principles, Haryana had no right to the Sutlej river water.