Swamy Keeps up Attack on CEA, Brushes Aside Jaitley's Remarks 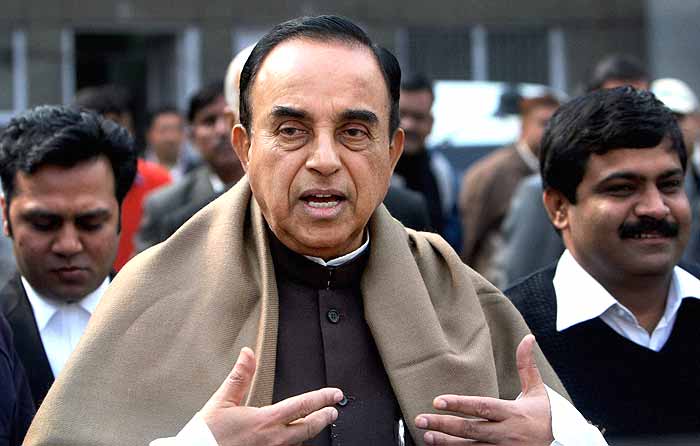 Print
A
A
A
increase text size
Outlook June 23, 2016 10:49 IST Swamy Keeps up Attack on CEA, Brushes Aside Jaitley's Remarks

Unfazed by the government and BJP distancing themselves from his remarks, Subramanian Swamy today continued his attack on Chief Economic Adviser Arvind Subrmananian while dismissing Finance Minister Arun Jaitley's counsel for restraint.

"Let him say what he wants....I have nothing to do with what Jaitley says. I can talk to the party President or the prime minister," he told reporters who asked him about Jaitley's disapproval of his attack on a technocrat in the government who cannot respond.

Earlier in the morning, Swamy kept up his criticism of Subrmanian saying he will "suspend" the demand for his sacking if the government considers him patriotic despite his attempts in the past of trying to twist India's arm.

"If an Indian?, held patriotic, can advise a foreign nation where he works, to twist India's arm, is to be forgiven, then I suspend my demand.

"AS (Arvind Subramanian) to US Cong: "US initiatives by discriminating against India companies and exporters will exert pressure on India to open up" AS 13/3/13!," Swamy tweeted today.

Swamy yesterday caused a flutter when he sought Subramanian's sacking for allegedly taking anti-India stance when he was an IMF economist in Washington prior to joining the Finance Ministry.

Jaitley had yesterday debunked Swamy's call for sacking Subramanian saying "Government has full confidence in CEA. His advice to government from time to time has been of great value".

Subramanian was appointed CEA by the BJP government in October 2014 after his predecessor Raghuram Rajan moved to the RBI as Governor in September 2013.

Swamy further tweeted today "If BJP Union govt says that we know all about AS but still he is an asset, then I will suspend my demand and wait for events to prove truth.

"Within a year after getting plum job in the Indian government especially since out of 1.25 billion we could not find any equal or better."

Citing an example of Arvind Subramanian's public criticism of Modi, he tweeted, "Who said: 'What about Gujarat? Mr Modi stands indicted as a mediocre performer (judged by tax collection & social outcomes)'...AS in BS 23/1/13."

Swamy said Arvind Subramanian had given statements earlier, asking US Congress to pressurise India and then only US trade will benefit.

"He was working with Pfizer's research institute and was batting for the US drug companies earlier," he said.

Asked about his response to Jaitley's support in favour of Subramanian, he said, "What Jaitley says or not, I have nothing to do with it. I can talk to party president or can talk to the Prime Minister."

Prodded further on when he would do that," he said, "When the need arises. There is no need now."

"If Government made him (CEA) knowing all this, then what can I do?...I have put across my point of view and I am told that all this was known earlier. So I said then you have done everything knowingly and have pardoned him, then I have no objection," he said.

Asked about his attacks on RBI Governor Raghuram Rajan, he merely said it is an "old issue" and "he has gone". "Why should the issue be raised now."

To a question on the Ram Temple construction this year, he said, "Yes, I have said that the temple has to be made".