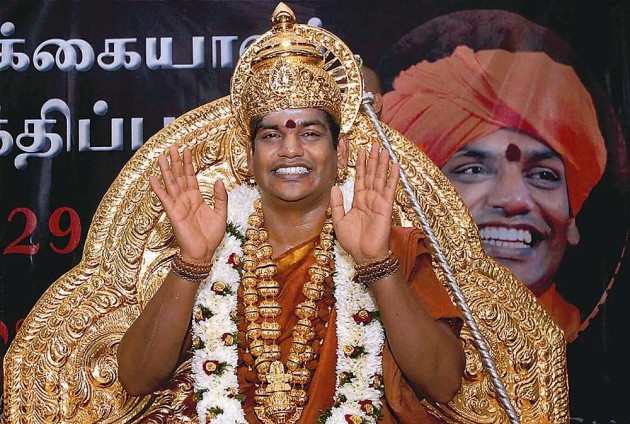 Controversial self-styled godman Nithyananda Swamy was today directed to undergo potency test in a 2010 rape case by the Supreme Court which rapped him and the Karnataka police for the "atrocious delay" in the case.

"Accused (Nithyananda) must subject himself to medical examination," a bench comprising justices Ranjana Prakash Desai and N V Ramana said while dismissing his plea to avoid the necessary medical test to determine his potency level.

The "lackadaisical approach of prosecution," in dealing with the case came for severe criticism by the bench which expressed "extreme displeasure" that further investigation was still required as Nithyananda and other accused "are obviously not cooperating with the investigating agency."

The bench also dismissed the plea of Ranjitha Menon, Tamil actress and disciple of Nithyananda, seeking impleadment in the matter to state that she was being wrongly projected as a victim.

In its 20-page judgement, the bench said "What is staring at us is the atrocious delay in disposal of the criminal petitions. The complaint is dated March 4, 2010. Cognizance of the offences has been taken in December, 2010. Petitions came to be filed by the petitioners in 2011/2012. We are in 2014."

"It is distressing to note that the petitions were kept pending at admission stage for almost over three years and could be disposed of only on July 16 this year," the bench said while asking the prosecution to "gear up its efforts so that trial begins".

The bench said it was deciding this matter with the hope that, "this case brooks no further delay" and "trust that the prosecution and the accused cooperate with the court so that the trial is concluded in the near future".

While rejecting the impleadment application of the actress, the bench said, "We are not inclined to expand the scope of these petitions. We, therefore, reject the applications.

"On her grievance, we are not expressing any opinion. If law permits, she may take such steps as she is advised, in the trial court," the bench added.

The apex court had on August 21 reserved its verdict on Nithyananda's plea challenging the Karnataka High Court's order directing him to take the medical test.

Karnataka High Court had on August 1 stayed the non-bailable arrest warrant issued by a Ramanagaram court against Nithyananda and four of his followers in connection with the case.

The high court had directed Nithyananda to present himself before the investigating officer for the medical test and also to appear before the Chief Judicial Magistrate (CJM), Ramanagaram, on August 18.

It had passed the order on the petitions filed by Nithyananda and his followers questioning the July 28 order of the CJM.

They had claimed that the CJM was not justified in issuing the non-bailable arrest warrant against them as the high court in its July 16 order did not direct them to be present before the CJM on July 28 but it was the date given for the trial court to commence hearing in the rape case, which was pending from four years.

In its July 16 order, the high court had upheld the 2012 order of the CJM, who had allowed the plea of the Criminal Investigation Department to subject Nithyananda to medical test to find out whether or not he was capable of having sexual intercourse, and also to collect his blood and voice samples.

Observing that Nithyananda had been granted regular bail, the high court in the July 16 order had made it clear that he should be taken into custody only for the limited purpose of subjecting him to medical test and for collecting voice and blood samples, if he voluntarily failed to appear before the investigating officer.