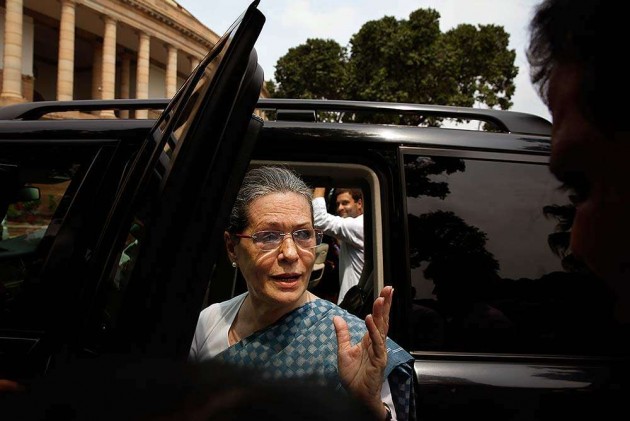 In an escalation of confrontation, Congress chief Sonia Gandhi today dubbed External Affairs Minister Sushma Swaraj as an "expert in theatrics" after her emotional defence on Lalit Modi issue, drawing a sharp retort from BJP which said it's easy to give "a byte" than to speak in Parliament.

Marking a renewed aggression by the Congress which continued its protest against the suspension of 25 of its MPs from the Lok Sabha, its Vice President Rahul Gandhi went a step further, asking the External Affairs Minister to explain how much money her family got from Lalit Modi, the former IPL boss, to keep him out of jail.

BJP used the dynasty stick to hit back at Rahul over his charge that Swaraj's family received money from Modi, saying people from "common families" have to earn their living and the Gandhi family may be an "exception". It also said Sonia's "theatrics" jibe reduces Parliament's dignity.

Sonia struck an uncharacteristically personal and aggressive tone in her response to Swaraj's's poser as to whether she would have acted differently if faced with such a situation. The minister posed the question while explaining her stand on the Lalit Modi issue in Lok Sabha yesterday.

"Sushma Swaraj is doing drama, she is an expert in theatrics.... I would have certainly done my best to help the lady(Lalit's wife) but not by breaking the law," she told reporters outside Parliament House.

In her impassioned defence, Swaraj said she had not helped Lalit Modi but his cancer-stricken wife and questioned if Sonia would have acted differently if faced with such a situation.

Rahul also scaled up his aggression against the minister, saying the whole matter relating to Lalit Modi and her was kept a secret as is done in a "theft".

"When a theft occurs, two things take place. Whatever happens is in secrecy and there is a financial transfer. What Sushmaji did was by maintaining secrecy and keeping her ministry in the dark?" he said.

"Sushmaji should tell the country how much money her family, her daughter and husband got from Lalit Modi to keep him out of jail," he told reporters.

Rahul also said that his mother would not have acted like the minister on the Lalit Modi issue.

BJP fielded Union Minister Smriti Irani to defend Swaraj from the onslaught by the Congress top brass against her.

To a question on Sonia's attack against Swaraj, Irani shot back asking if the Congress president wanted to say that Parliament had become a "theatre".

"Such a statement is disrespect to the people's mandate.... Congress party especially Rahul Gandhi should not work to reduce Parliament's respect," she told reporters.

Taking a dig at Sonia and her party's decision to stall Parliament, Irani said giving a byte for one and a half minute may be easy but speaking in Parliament for over one and a half hours without support of papers may be difficult.