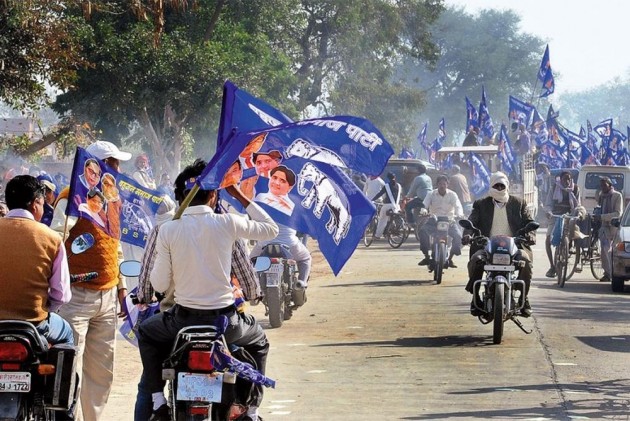 Print
A
A
A
increase text size
Outlook March 12, 2017 17:05 IST Support By Muslim Clerics Did Not Translate Into Votes For Mayawati In Uttar Pradesh

The support extended by different Muslim organisations and clerics to the Mayawati-led Bahujan Samaj Party on the eve of assembly polls did not pay off for the party, which could pocket only 19 seats, one of its worst ever performance.

The BSP, which had fielded nearly 100 Muslim candidates, managed to win only four out of the 77 assembly seats dominated by the minority community voters.

Some of the Muslim clerics who had urged the Muslim voters to vote for the BSP were Shahi Imam of Delhi's Jama Masjid Ahmed Bukhari, Shia cleric and senior member of All India Muslim Personal Law Board Maulana Kalbe Jawwad, besides the Rashtriya Ulama Council, an organisation which has some influence in Eastern Uttar Pradesh.

Rampur, where Muslims constitute nearly 50 per cent of the electorate, saw not even a single MLA of the BSP getting elected.

Similar situation prevailed in Saharanpur and Moradabad. The BSP also failed to make its presence felt in the Deoband assembly constituency in Saharanpur. The Muslim seminary Darul Uloom Deoband is located in Deoband.

In Amroha, Bareilly and Shahjahanpur, the party performed miserably. The party also could not fare well in Shamli, Muzaffarnagar, Meerut and Aligarh.

The only consolation for the party came from Azamgarh, where it won in Sagri, Mubarakpur, Lalganj and Didarganj assembly constituencies.

In Mau district, barring the Mau assembly seat which was won by mafia-turned politician Mukhtar Ansari, the party could not win other seats in the district. Even, Mukhtar's son and brother could not win.

Asked about the reasons for the BSP's defeat, President of Rashtriya Ulama Council (RUC) Aamir Rashadi told PTI, "The arrogance (ahankaar) of BSP chief Mayawati and her efforts to sideline Muslim clerics and BJP's success in effectively dividing the Muslim votes in the state led to significant losses for the BSP."

Pledging its support to the BSP last month, the Council had withdrawn 84 candidates fielded by it in the polls.

He said, "The need of the hour both in the interest of the state and that of the country, is that we (RUC and BSP) should work in close coordination with each other, so as to curtail the movement of the fascist forces and at the same time help the state to get relief from the prevailing goondaraj (rule of the goons) and parivarwaad (family feud)."

"Earlier in the past, there had been efforts to bring all the political parties working for the upliftment of Muslims under one umbrella, but it failed. This led to scattering of the Muslim votes," Rashadi had said.