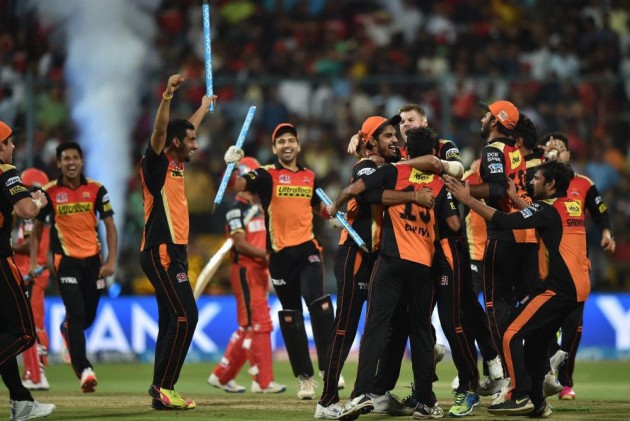 In a battle between IPL's best batting and bowling line-ups, the Orange Army came up trumps despite initial blitzkrieg from Chris Gayle and Kohli, defending their total of 208 for seven by restricting the home team to 200 for seven.

It was David Warner's batting and astute captaincy complemented by some inspirational death overs bowling by Mustafizur Rahaman (1/37 in 4 overs) and Bhuvneshwar Kumar (0/25 in 4 overs) that clinched the issue.

Warner, who hit 68, finished second in run-getters' list with 848 runs.

The turning point certainly would be the 24 runs that Ben Cutting (39 no and 2/35) got in the final over off Shane Watson's bowling during Sunrisers innings and then came back to dismiss a rampaging Gayle.

With 18 needed off last over, Bhuvneshwar, who bowled 13 dot balls gave only 9 runs. As the last ball was delivered, skipper Warner's joy knew no bounds with the entire team and dug-out joining him in wild celebrations.

But in the end, Kohli was the tragic hero once again after the WorldT20 in a tournament that will be remembered for his exploits.

He finished the tournament with an astounding 973 runs at an average of 81.08 and and equally impressive strike-rate of 152.03. He hit an unbelievable four hundreds and seven half-centuries, not to forget 83 boundaries and a staggering 38 sixes.

Once the duo were back in quick succession, it depended AB de Villiers (5), who had one of his rare failures as Sunrisers came back into the match.

KL Rahul was done in by a slow off-cutter from Cutting and Shane Watson found it hard to get the big shots going as Mustafizur accounted for him.

Stuart Binny hit Mustafizur down the ground for a six as the equation came down to 37 from 3 overs.

But Bhuvneshwar bowled a brilliant 18th over keeping everything in the blockhole as only 7 came off the over.

RCB 30 were needed off last two overs as Binny (9) was run-out off the first delivery of the 19th over bowled by Mustafizur. Sachin Baby hit six off the last ball as RCB's requirement of final over was 18 runs but Bhuvneshwar kept his cool to win the match for Sunrisers.

In pursuit of 209, it was Gayle who started the carnage with two sixes and a boundary off the fourth over bowled by left-arm Barinder Sran.

In the fifth over of the innings, Gayle hit Cutting for a six and a four off consecutive deliveries to bring up RCB's 50.

Gayle was already in his 40's when Kohli finally reached double figures as RCB also managed an identical 59 for no loss after Powerplays.

Gayle's 50 came off 25 balls with a six down the ground off Moises Henriques.

The likes of Henriques and Cutting were guilty of bowling too many length balls to Gayle, who promptly dispatched them over the ropes.

The mayhem continued as the 100 came off 9 overs with Gayle's contribution being 74 compared to Kohli's 20.

Poor David Warner had no option but to bring Mustafizur for a second spell within the 10 overs but then the damage had been done as Kohli got into the act with a four and a six.

The Gayle mayhem ended when he tried to hit Cutting for a ninth six but mistimed it with Bipul Sharma running in from his third man position to take the catch.

Gayle's 76 off 38 balls had four boundaries and eight sixes. By the time he was out, Kohli was already in his zone picking up boundaries at will. The 50 came off 32 balls with a six off Sran. But immediately after that Sran hit one back of the length and Kohli gave him the charge only to get an inside edge that saw the leg-bail being clipped.

The stadium was stunned into silence as Kohli's 35-ball-54 studded with five fours and two sixes came to an end.

De Villiers and KL Rahul were two new men at the crease but the target was 68 off 42 balls, slomething well within their reach.

But it was left-arm spinner Bipul Sharma, who came to the party as he got De Villiers to give him inside out charge but he skied to Henriques.