Sunil Joshi Case: Sadhvi to Appear in Court on Mar 30

outlookindia.com
-0001-11-30T00:00:00+0553
Sadhvi Pragya Singh, a key accused in the 2008 Malegoan blast case, would be produced before a court in Madya Pradesh tomorrow in connection with the murder of RSS activist Sunil Joshi.

Joshi, a suspect in the Samjhauta Express blast case, was shot dead at Devas in Madhya Pradesh on December 29, 2007.

As per the warrant, the Devas court has directed the Madhya Pradesh police to produce Sadhvi tomorrow, Salian said.

"The special Maharashtra Control of Organised Crime Act (MCOCA) court here has directed jail authorities to make arrangements for her travelling to Devas either by train or by flight but not by road," Sadhvi's lawyer Rameshwar Gite said.

Gite further said that the court also directed the JJ hospital authorities to discharge her.

Though Sadhvi was arrested last month in the Joshi murder case, police had not sought for her physical custody.

Sadhvi was arrested in connection with the Malegoan blast case on October 23, 2008. 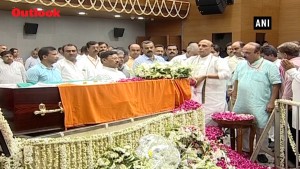