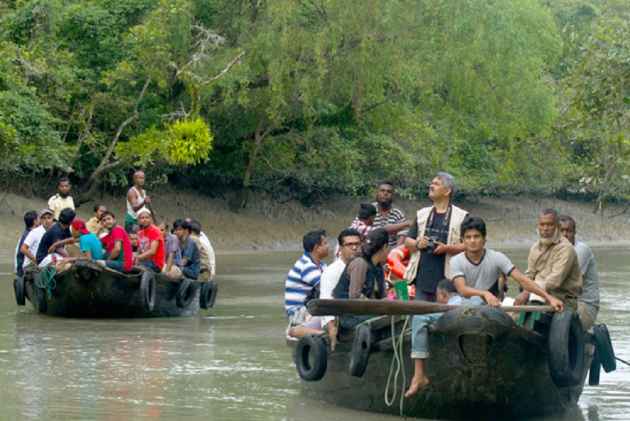 The porous riverine border with Bangladesh at Sunderbans are shortly to be equipped with infra-ray pillars and smart sensors to prevent rampant infiltration and smuggling.

The BSF said that the infra-ray pillars and smart sensors were a technological answer to the growing problem of cross-border crimes.

Already installed, the devices would start operating once the monsoon was over in the next three months, the BSF, South Bengal, said.

A senior BSF official told PTI that the project would be first launched in three-four kilometres along the border stretch.

"The project will start in the next three months as we are waiting for the monsoon to get over. After that we will observe the devices till December. If everything goes well, the new system will be in place permanently by January, 2018," tbe official said.

According to BSF sources, the cost of tbe installation of the Infra-ray pillars per kilometre will be around Rs 25-30 lakh.

"Although funds are always a matter of concern, we will increase the coverage area from 3-4 kilometres to the entire stretch of the border where we don't have proper fencing due to the treacherous nature of the terrain," another BSF official said.

Of the 4,096-km Indo-Bangladesh border, as much as 2,216.7 area lies in West Bengal, out of which 300 km is riverine border with Bangladesh in the Sunderbans. The BSF patrols amid the dense mangrove forests or where the rivers meet the Bay of Bengal.

"The infra-ray pillars and smart sensors will be monitored through a satellite-based signal command system. They will have night and fog operability tools. The sensor blips alert border guards," the official said.

The para-military force is using the Farheen laser wall technology at the Indo-Pakistan border and has reaped benefits through better management of the borders.

According to BSF sources, the installation of infra-rays and smart sensors is part of the Centre's plan to keep a tight vigil on the Indo-Bangla border following intelligence inputs that terrorists and anti-national elements are exploiting the unfenced areas and riverine borders.

"In the Bengal frontier it became a priority after terror attacks in Dhaka last year. There were inputs that terrorists and anti-national elements were exploiting the unfenced areas and riverine borders," said the official.

The decision to install laser walls in areas where barbed wire fences could not be erected due to the treacherous terrain or marshy riverine topography was taken by the BSF two years ago.

The Union Home Ministry and BSF expedited the installation and activation of laser walls on the western front after the Pathankot terror attack in January, last year.