Subramaniam Seeks Withdrawal of Candidature as Judge of SC 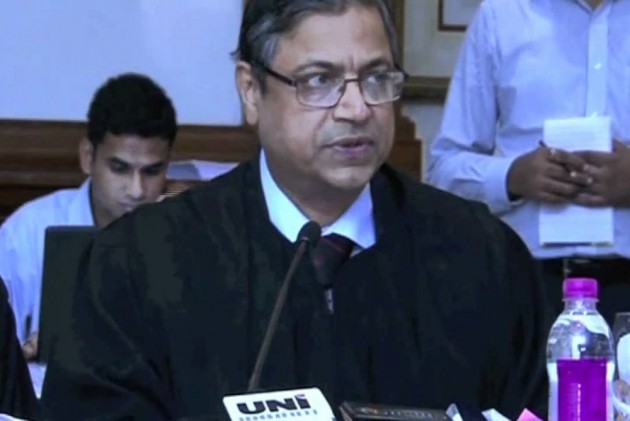 Print
A
A
A
increase text size
Outlook June 25, 2014 12:17 IST Subramaniam Seeks Withdrawal of Candidature as Judge of SC

Eminent lawyer Gopal Subramanium today opted out of being considered for appointment as Supreme Court judge after lashing out at the Modi government accusing it of ordering CBI to "scrounge" for "dirt" against him to scuttle his elevation.

Subramanium, who had assisted the Supreme Court in the Sohrabuddin fake encounter case in which Amit Shah, a close aide of Prime Minister Narender Modi is now an accused, said that he was being "targeted" because of his independence and integrity.

He suggested that his role as amicus curiae, a friend of the court, in the Sohrabuddin case, could have been the reason for government opposing his elevation, although he had no direct evidence.

Subramanium, a former Solicitor General, sent a 9-page letter to the Chief Justice of India R M Lodha withdrawing his consent to be appointed as a judge saying that he did not want his elevation to be "the subject matter of any politicisation".

His name had been recommended for appointment to the Supreme Court bench by its collegium along with three others, Chief Justices of Calcutta and Odisha High Courts Arun Mishra and Adarsh Kumar Goyal respectively and senior advocate Rohinton Nariman.

Recent reports have suggested the NDA government's reluctance to Subramanium's appointment while it is said to have cleared the other three names. The CBI and the Intelligence Bureau (IB) are said to have given adverse reports against him.

Subramanium said that he had been informed by the Chief Justice on May 15 that he had been given a clean chit by both IB and CBI. But in the past two weeks media reports had spoken about alleged adverse reports against him by the two agencies.

The events of the past few weeks "have raised serious doubts in my mind as to the ability of the executive government to appreciate and respect the independence, integrity, and the glory of the judicial institution", he wrote to the Chief Justice, adding, "I do not expect this attitude to improve with time".

He said that he had never met Modi except once when he was the Solicitor General and the former was the Chief Minister of Gujarat. He had been greeted "with a measure of respect" by Modi who had invited him and his wife to Gujarat as his guests of honour although he had not availed of that hospitality.

Subramanium said that he had never met Amit Shah and had only seen his photographs in newspapers recently. In the course of hearing on Shah's bail application, he had said that his liberty should not be infringed and he may be allowed bail but asked to remain outside Gujarat.

"This is only to indicate that I had no personal vengeance or any kind of grudge against the said Mr Amit Shah," he said in the letter to Justice Lodha.

A "perturbed" Subramanium gave a series of TV interviews after sending his letter to the Chief Justice in which he had said that he would be addressing the media to dispel allegations that had figured in news reports recently.

Attacking the reports as "malicious insinuations based on half truths", he said these appeared to be "a result of carefully planned leaks aimed at generating doubts in the minds of the collegium and of the public as to the suitability and propriety of appointing me as a judge of the Supreme Court."

Rebutting specific allegations, Subramanium told the Chief Justice that reports that he had convened a meeting between CBI officers and the counsel of a person (the then Telecom Minister A Raja) who was a suspect at that time in the 2G case, were factually incorrect.

He said that he had advised the then Prime Minister Dr Manmohan Singh to allow a CBI investigation into the conduct of Raja which was accepted.

He also dismissed allegations of connection with lobbyist Niira Radia during his tenure as government law officer.

Subramanium said that he was dismayed by reports that the file forwarded by the court to the government recommending him and three others for elevation has been "segregated" and the names of the other three had been cleared by the government as well as by the President, who had issued warrants for their appointments.

"I further understand that the segregation has been carried without the file being sent back to the collegium for reconsideration.

"In fact, I have now reliably learnt that no file was sent seeking reconsideration and that segregation and appointments have been made outside your knowledge and also without the active consent of the collegium.

"If my understanding is correct then the aforesaid three appointments appeared to be against the framework prescribed by the Constitution and by the Supreme Court in various pronouncements," he said in his letter to the Chief Justice.

Asked if his role in the Sohrabuddin case was the motive behind the government's decision, Subramanium said, "that is what is believed. But I have no direct evidence.

"But in the process of deduction after cancelling four other false allegations, that is what remains."

When pressed further, he said, "I cannot think of any other motive.."

He said soon after coming to power the new government had given the CBI a mandate to do "dirt digging" which was brazenly done. An attempt at "scrounging for dirt" against him was done, he said.

"If the government would have had an ounce conscience, it would not have returned the recommendation (of the collegium)", Subramanium said.

He also did not spare the judiciary in the episode. "I told the CJI that I will not be able to take this any more. My family is in agony. There was no one in the judiciary to tell the government that is not the way a candidate for judiciary is to be decided."

"I don't need a character certificate from the executive government or any member of the judiciary. I have lived a 34-year unblemished record as a lawyer. I have done nothing wrong. I don't have to offer any explanation to anyone," he said.

Subramanium maintained that by allowing segregation by the executive what was implicit was the "surrender" of its independence by the judiciary.

"I was not angling for a job. I was invited for the job. If the government had discomfiture (over his name) it should have been open to persuasion but it can't be that you don't open up," he said.

Giving reasons for his opting out of consideration for elevation, Subramanium said "a judge requires public confidence. He can't begin his career with trust deficit."

"I have consciously opted out of being a judge and possibly the chief justice," he said claiming he was a victim.

Rejecting the reported claim in an IB report that he was given to spirituality and not bound by judicial reasoning, Subramanium said as an amicus curiae in the Sri Padmanabhaswamy Temple case he did observe certain religious traditions as was required while entering the temple and doing the probe into missing treasure.

And he did pray to God to give him guidance but that does not make him devoid of jurisprudence.

"When I do my duty as a lawyer I am completely secular and logical and stick to the brief," he said.

Citing yet another charge that he had "behaved funnily" by visiting Parliament House complex being the government's lawyer in the 2001 terror attack case, he said he went there on a morning to pay homage to the martyrs who died facing the terrorist bullets and went back to do his duty as a lawyer.

"It is hitting below the belt," he regretted.

Expressing surprise and feeling "flattered" that IB kept a tab on his spirituality, Subramanium said, "I don't want IB to be the judge of a lawyer whether he is rational or spiritual."

Maintaining that he had no evidence whether Modi had any hostility or animus against him, the senior lawyer said he would like the government to reconsider the idea that a judge should be pliable and that he should not ask questions of the government.