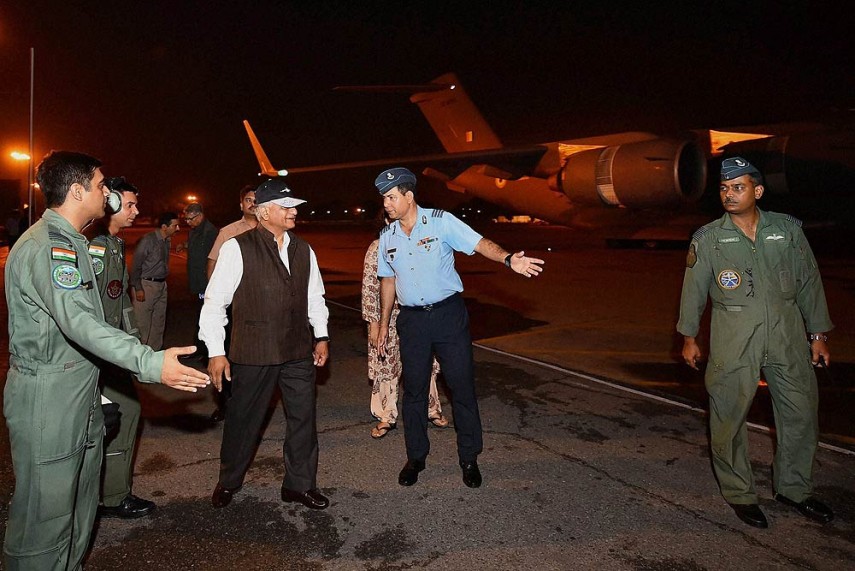 With thousands of Indians reeling under severe financial crisis in Saudi Arabia after losing their jobs, Minister of State for External Affairs V K Singh tonight left for the Gulf nation to assess the situation and finalise modalities to bring back those who want to return to India.

Ahead of Singh's visit, the Indian embassy there has launched an initiative to collect details of the Indians laid off by their employers.

Currently, a total of 7,700 affected Indian workers are living in 20 camps and the embassy is in the process of collecting information about others residing in different parts of Saudi Arabia.

Thousands of Indian workers have lost their jobs due to slowdown in Saudi economy, triggered by low oil prices and cut in spending by government of that country. The Indian mission has provided food to the Indians who cannot buy it.

Earlier today, Singh's ministerial colleague in the MEA M J Akbar, who looks after issues relating to the Gulf region, met Saudi Ambassador Saud bin Mohammed Al Sati and discussed the difficulties being faced by Indians who have lost their jobs.

"Glad to receive support and assurances from Saudi government to resolve all outstanding issues, including that of our Indian labourers," Akbar said in a series of tweets.

External Affairs Minister Sushma Swaraj had yesterday said that all affected Indians will be brought back.

A team from the Indian embassy had yesterday met Saudi labour officials to complete procedures relating to the protection of legal dues of the workers once they have departed from the country.

Swarup said the Indian embassy in Riyadh convened a meeting of community social workers and volunteers yesterday, where the Ambassador sought their help in collecting information about the affected workers.

They were provided a proforma on which the requisite information is to be submitted to the embassy.

The government has requested the Saudi authorities to give the unemployed Indian workers exit visas without NoC from employers and also urged it to clear the dues of workers who have not been paid for months, whenever they settle the accounts with the companies concerned.

MEA officials said Singh will reach Jeddah early tomorrow morning and is scheduled to return on the evening of Friday. He is traveling to the Saudi city via Dubai.

Five workers from M/s Shifa Sanaya are in a camp in Riyadh and 13 workers who were employed with M/s Taiya Contracting Company are staying in one camp.

"In addition, there are 2,153 Indian workers belonging to M/s Saudi Oger in six camps in Jeddah all of whom have been provided food by the Indian Consulate. Hence, there are a total of 7700 affected Indians workers in 20 camps," said Swarup.

"The information about each worker, about his total service, pending salary, desire to exit / continue / transfer is being collected separately," said the MEA Spokesperson.

Making a statement in Parliament yesterday, Swaraj had said the workers will be brought back home, asserting that not one of them will go hungry.

"Not one worker of ours will go hungry. This is my assurance to the country through Parliament... We will bring all of them back to India," she said.

Issues like logistics and modalities of a possible repatriation of the workers who want to return to India will be worked out during Singh's visit.

The government, Swaraj said, was in touch with the foreign and labour offices in Saudi Arabia to ensure early evacuation of affected Indians.