Storm Throws Life Out Of Gear in Delhi-NCR, Nine Killed 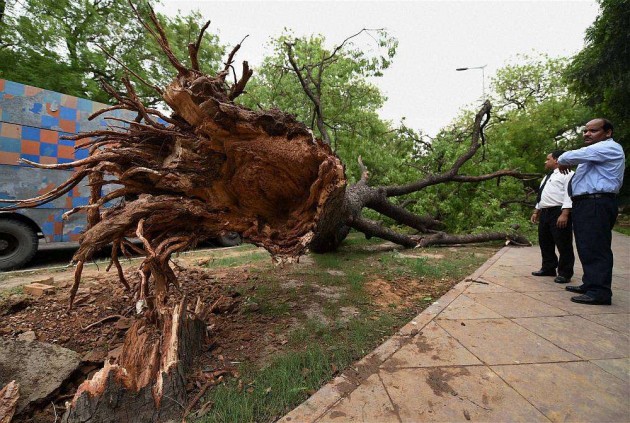 At least nine people were killed in the NCR region, including six in Delhi, as a massive thunder storm lashed the region crippling road traffic, metro services and flight operations and hitting power supply.

Delhi Police said six people died and 13 were injured in various areas of the city in accidents like felling of trees, collapse of walls and electrocution following the storm which was accompanied by winds at a speed of over 90 kmph.

Met department termed the storm as "cumulonimbus" and attributed it to western disturbance over Pakistan.

NCR areas of east Delhi, Noida and Ghaziabad were most affected by the storm.

Thousands of people were stranded outside Metro stations and on roads as traffic almost came to a halt due the storm and high-speed dusty winds blowing at a speed of over 90 kmph.

Met office said similar weather conditions are likely to persist for over the next two days.

At least 12 flights were diverted due to the storm, an IGI official said.

The city saw massive traffic jams as the storm uprooted trees snapping power lines in many areas and affecting traffic lights leading to chaos on the streets.

"The cumulonimbus brings tall thunderstorms and dusty winds with a speed of over 92 kmph and are caused because of western disturbance, which is currently over Pakistan.

The storm affected northeast Haryana and the NCR. But parts of east Delhi, Noida and Ghaziabad were affected the most, he said.

"This phenomena is likely to continue for the next two days," Rathore said.

The maximum temperature recorded today was 42.8 degree Celsius while the minimum was 29.1 degree.

Metro train services were also disrupted for about an hour due to power failure caused by the storm, inconveniencing thousands of commuters.

At some locations including Janakpuri and Inderlok material like tin sheet and pipes got entangled into the OHE (Overhead Electrification Wire) due to the dust storm, making train movement impossible.

Passengers were stranded at various metro stations and even asked to de-board the trains at various locations until normal power supply was resumed.

The train services, however, resumed from 6 PM onward after resumption of power supply from DTL and clearance of all material from the OHE wire by DMRC engineers.

However, even after normal services were restored, it took a lot of time to clear the backlog of stranded passengers. Long queues were seen at metro stations.

"I was waiting at Janakpuri metro station for more than an hour. Even after metro services were restored, I could not get into the first two trains as they were jam-packed," said Kriti Mistry, a student