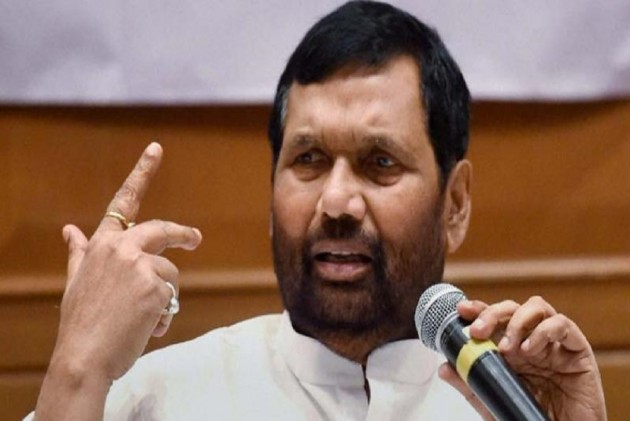 Union Minister and LJP president Ram Vilas Paswan on Tuesday took a dig at opposition parties over their attempts at unity, saying they should not waste their time as there is no vacancy for the prime minister's post till 2024.

Briefing reporters following his party's national executive meeting on April 29 and 30 in Dadra and Nagar Haveli, he heaped praise on Prime Minister Narendra Modi for his "pro-Dalit" measures.

Paswan also expressed confidence that Modi would remain in charge till 2024.

He compared his former colleagues-turned-rivals, who are now in different parties, to an orange fruit which looks whole from the outside but is divided inside.

"People like Nitish Kumar (JD-U), Mulayam Singh Yadav (Samajwadi Party), Lalu Prasad (RJD) can never be one. They should stop wasting their time in looking for a prime ministerial candidate. There is no vacancy," he said.

The next Lok Sabha elections are due in 2019 and the BJP- led NDA is in a buoyant mood following its massive win in Uttar Pradesh assembly polls.

Paswan raked up corruption allegations against Prasad and his two sons, both ministers in the Nitish Kumar government, and said the JD(U) chief is troubled over this.

His party, he said, is also keen on the passage of the Women's Reservation Bill, which mandates 33 per cent quota for women in Parliament, with separate reservation of SCs, STs and OBCs within it.

"All parties are ready for this," he said.

The LJP also favours simultaneous Lok Sabha and assembly polls and they should be funded by states, he added.

Paswan repeated his party's demands, including quota in private jobs and reservation for Dalits, minorities, backward and tribal students in private schools.

He also pithed for starting Indian Judicial Service on the lines of IAS to recruit judges with quota provisions.

Lauding Modi for promoting places associated with Dalit icon B R Ambedkar, he said his last speech delivered in the Constituent Assembly be included in school syllabi.

Ambedkar should also be given a Nobel award, he said. The honour is generally not bestowed posthumously.

His party has sought free land for landless people for residential purpose and clean water for every citizen, he said.

The LJP resolution demanded that all villages with 20 per cent and more population of Dalits be brought under the Pradhan Mantri Adarsh Gramin Yojna for quicker development.

The consumer affairs minister also clarified that he never asked restaurants to fix the portion of foods they give to consumers but only wanted them to inform diners about the quantity of food they are offering at a fixed price.

Consumers have a right to know, he said.

On reservation, he said Modi has insisted that it can never be removed and also demanded 15 per cent quota for the poor from general castes.