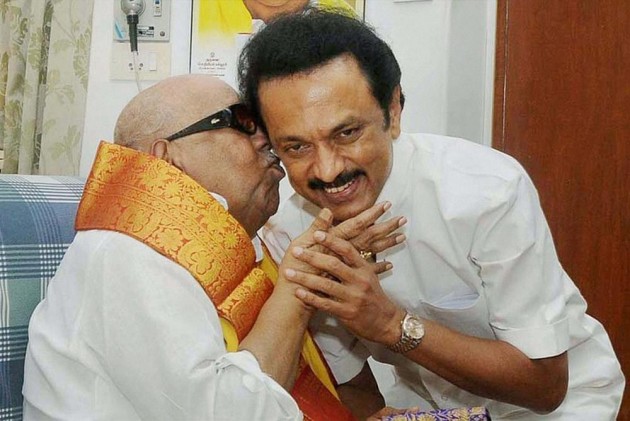 The elevation of 63-year-old Stalin to the top post at the party general council meet here, though a foregone conclusion, comes against the background of 93-year-old party patriarch Karunanidhi's failing health. Karunanidhi, who will remain president, was hospitalised twice recently and is recuperating now.

At the general council meet, necessary amendments were made in the rules to facilitate elevation of Stalin, a former deputy Chief Minister.

The elevation also comes days after the ruling AIADMK elected Sasikala Natarajan as the new chief after J Jayalalithaa’s death.

That Stalin will succeed Karunanidhi has been an open secret in the corridors of DMK for the last many years, with Karunanidhi himself having given ample indications of this.

Alongside his present post of Treasurer, Stalin will now be holding the position of Working President, party veteran and General Secretary K Anbazhagan told the meet, proposing his name for the post.

Soon after Stalin was named party working chief, celebrations broke out outside DMK headquarters 'Anna Arivalayam' and also at his residence, with party cadres bursting crackers and distributing sweets, hailing the elevation of their 'thalapathi' (commander).

Stalin in his acceptance speech after his elevation broke down while making a reference to the failing health of his father and party president Karunanidhi.

Stalin said he accepted the new responsibility with a heavy heart in view of the health condition of his father.

Stating that in the past, he had felt proud, happy, and rejoiced when he assumed new responsibilities, he broke down while saying that, "today I am not in such a stage (feeling happy about elevation) this is the truth."

"In view of the health status of party chief, I accept this position with a heavy heart," he said.

He said his work as working chief would be that of aiding the party patriarch.

"Be it our president, general secretary or other senior leaders, I will follow the path shown by them and I am ready carry out the party activities with all your support," he said. Stalin said he viewed the new position of working chief as a responsibility and added that "I take a pledge that I will function responsibly."

Stalin in his brief acceptance speech said his elevation was not a sudden occurrence. "The matter was given ample though, it was well discussed and consulted (among party senior leadership)," he said.

Hailing Karunanidhi as a leader "who gave rest to rest itself," he said such a "leader needs some rest." Explaining further about the circumstances surrounding his elevation, he said Karunanidhi who had taken ill should now fully recover.

Stalin said in view of the top leader's health, the senior leadership after discussions, decided that Karunanidhi needed rest and had "persuaded and urged" him to become working president.

"Finally, the change has been effected by way of a resolution and it has been adopted in this general council meet with your overwhelming support," he told partymen.

Stalin had earlier encountered stiff resistance to becoming party chief from his Madurai-based elder brother M K Alagiri, who was expelled from DMK in 2014 for anti-party activities.

Though in hierarchy, the president still continues to be the top post, the working president's post is seen as the de facto numero uno position now given the failing health of Karunanidhi.

Alagiri, who was a former union minister for chemicals and fertilisers, had made it clear that he would accept none other than Karunanidhi as his leader.

After Barathy's resolution was unanimously approved by the more than 3,500 strong general council, Anbazhagan proposed Stalin's name and was seconded by party principal secretary Durai Murugan.

The resolution said the working president will have all the powers and responsibilities vested with the post of president.

After his elevation, Stalin drove to the Gopalapuram residence of Karunanidhi to seek his blessings.

Speaking to reporters, Stalin said he would function as per the directives of "Thalaivar (Karunanidhi), Perasiriyar (general secretary Anbazhagan) and other party veterans."

Reflecting Stalin's complete hold over the party, all top, second and third rung leaders went to his Alwarpet residence and greeted him.

Stalin reminded the General Council that his rise to the top post was not a sudden occurrence, but after slogging for DMK for nearly 50 years and something which the top leadership had thoroughly discussed.

"The matter was given ample thought, it was well discussed and consulted (among party senior leadership)," he said.

Reminiscing his about five decade old political journey in the party, he said from a very young age, he grew up in a political ambience when party workers gathered at their residence to meet his father and then party top leader Karunanidhi. "Gradually, I developed a desire, for public life," he said.

"I took a megaphone and campaigned for the DMK in the civic polls and that was the first stage," he said when he was still in his teens. He said he went on to establish "Ilangyar Mandram" (Youth Forum), which later grew into a party youth wing.

He recalled that he had begun party work as a teenager, holding lower rung posts beginning with a ward representative and then gradually climbing the ladder to now culminate in the post of party working president.

"Be it our president, general secretary or other senior leaders, I will follow the path shown by them and I am ready to carry out party activities with all your support," he said.

Stalin, who had also held the post of Chennai Mayor, said he viewed the new position as a responsibility and added that "I take a pledge that I will function responsibly."

Hailing Karunanidhi as a leader "who gave rest to rest itself," he said such a "leader needs some rest."

Dwelling on the circumstances surrounding his elevation, he said Karunanidhi who had taken ill should fully recover.

In view of Karunanidhi's health, the senior leadership, after discussions, decided that he needed rest and had "persuaded and urged" him to become working president.

Recalling his five decade old political journey in DMK, he said he was influenced by the political ambience at home as his father was a top political leader. "Gradually I developed a desire for public life," he said.