SRK Banned From Wankhede for 5 Yrs, BCCI to Step In 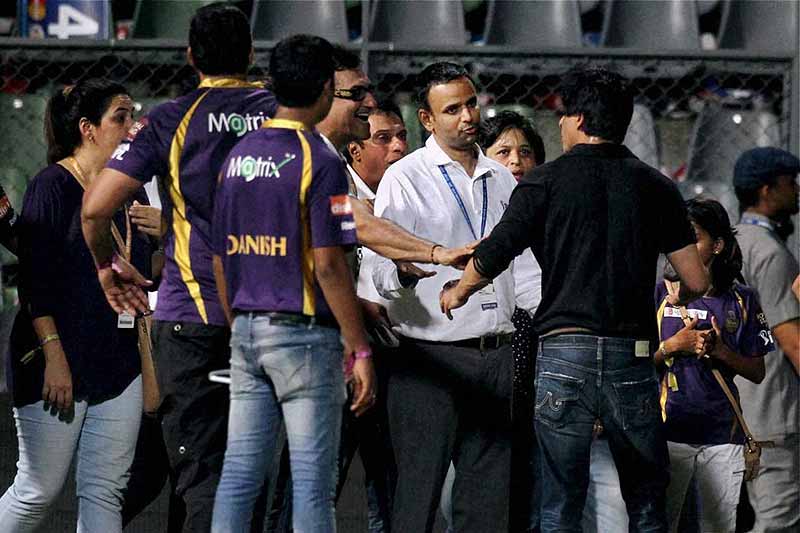 Khan, who was alleged by the MCA to have manhandled a security guard of the Association besides hurling choices abuses on its officials after the IPL game on May 16 between KKR and Mumbai Indians, was threatened with a life ban by some officials before the managing committee toned it down to a five-year period.

The decision to debar Khan was taken by the MCA's managing committee at its emergency sitting chaired by its President Vilasrao Deshmukh.

"The Managing Committee of the MCA at its meeting today has condemned the behaviour of Shah Rukh Khan, who without any provocation hurled abuses at MCA officials and manhandled the security guard in the presence of BCCI-IPL officials," Deshmukh said.

"Shah Rukh had no regrets for his action and misbehaviour. He in fact has justified his action of manhandling the security guard and abusing and threatening MCA officials. The Managing Committee is forced to ban Shah Rukh Khan from entering the Wankhede Stadium for a period of five years," said Deshmukh in a statement before answering the questions.

Asked whether there would be any change in MCA's stand if Khan apologises later, Deshmukh said the question did not arise.

"The ban is a message to every one that if anyone behaves like that action will be taken," said Deshmukh, adding that more than 50 per cent of the members in the MCA managing committee were present when the unsavoury incident took place on Wednesday night.

The MCA president said the Cricket Board had been informed of the incident, a fact corroborated by BCCI's CAO Prof Ratnakar Shetty, who was present at the conference as one of the vice-presidents of the MCA.

Shetty said BCCI president N Srinivasan has received a complaint letter from the MCA about the incident involving Khan and the Board would now put in place some measures to avoid a repeat of such incidents.

"The complaint from the MCA has been received by the BCCI president. It will also lead to putting in place some necessary measures in the IPL," Shetty said.

Deshmukh said MCA was an independent body and had full power to take a decision to impose a ban on an IPL team co-owner as it deemed fit and said it was a unanimous decision to debar Khan by its managing committee members.

"MCA is an independent body capable of taking the decision. The incident happened in front of BCCI and IPL officials and more than 50 per cent of our managing committee members were witness to it. A message has been sent. We have informed the BCCI too," said Deshmukh.

Asked if the BCCI can reverse the decision to ban Khan, Deshmukh said, "We have taken a decision to protect the dignity of our association. BCCI is our parent body and we have written to them informing what had happened. We have no control over BCCI's decision. We are also an independent body with the Wankhede being our property.

IPL Chairman Rajiv Shukla, however, said that a final decision will be taken by the BCCI.

"State bodies can only recommend but a final decision has to be taken by the BCCI. When the matter comes to BCCI, the Board will decide (on the ban)," he told reporters in New Delhi.