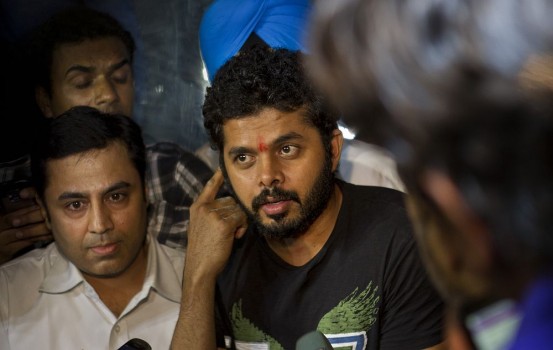 S Sreesanth's plans to come back to competitive cricket was dashed today as the BCCI denied the India fast bowler NOC (No Objection Certificate) to play league cricket in Scotland.

Sreesanth had been trying to play league cricket in Scotland this year but the BCCI, which had imposed a life ban on him following his alleged involvement in the IPL spot-fixing scandal in 2013, has refused to give him the necessary permission.

According to an ESPNcricinfo report, a BCCI official confirmed that they had not obliged his request.

In May 2013, Sreesanth and two other Rajasthan Royals bowlers - Ankit Chavan and Ajit Chandila - were arrested for alleged involvement in spot-fixing. All three players were later banned for life by the BCCI.

In 2015, Sreesanth was cleared of spot-fixing charges by a Delhi trial court due to insufficient evidence under the MCOCA act, a special law passed by the Maharashtra state government to tackle organised crime syndicates and terrorism.