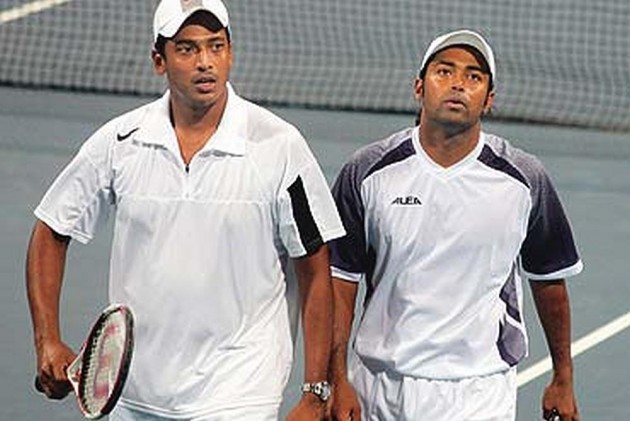 Sports Minister Vijay Goel today said he will try to sort out the differences between Mahesh Bhupathi and Leander Paes if he gets a chance to meet the feuding tennis stars.

Bhupathi and Paes were engaged in an ugly public spat during the recently-concluded Davis Cup tie against Uzbekistan.

Paes had accused Bhupathi of being disrespectful towards him by not telling him that he would not be in the playing squad for the tie, while Bhupathi had asserted that he never promised a certain spot to Paes.

"I think it is captain's prerogative how he selects the team. But as far as the spat between the two players, I will meet the players and if there are any differences, I will try to sort them," Goel told reporters.

Asked if the acrimonious episode had take the sheen off the 4-1 win over Uzbekistan, Goel said: "I don't think so but I would want to meet them and know why there is this public view that there is some difference somewhere between the two and I would try to sort it.

"But as far as the sport is concerned, I don't think I should interfere because it is the decision of the captain to do what he feels is good for the game."

"I will meet the Australian PM tomorrow and sign the India-Australia sports partnership under which there will be exchange of coaches.

"We will tie up with Canberra and Victoria university and take their help for the National Sports University that we are constructing at Manipur. So there will be an exchange of technical knowhow," Goel said.

Former India tennis player Vijay Amritraj today called on the Sports Minister to discuss the roadmap for development of tennis in the country.

"I have been meeting a lot of former players after Rio Olympics to understand their views and seek their help in the development of sports. So I met Vijay Amritraj, he is a great tennis player and we discussed how can we help tennis grow in the country," he said.