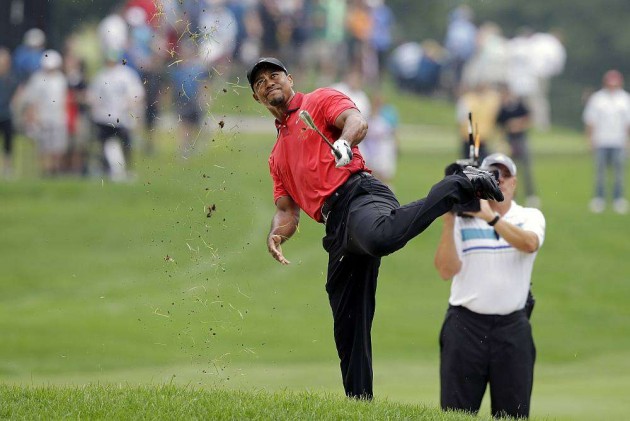 Young American Jordan Spieth opened up a seven-stroke lead with a spectacular nine-under while Tiger Woods fought off a bout of fever to make further progress at the Hero World Challenge by shooting a 69 in the third round, here.

The 21-year-old Spieth first completed his second round with a par score on the 18th hole and then continued his red-hot form by returning a card of 63, which featured nine birdies. The final one came on the 18th hole with a breathtaking 45-feet putt.

The incredible birdie putt was a 54-hole tournament record. He acknowledged the huge cheer from the crowd by lifting his club and left the Course with an ear-to-ear smile on his face.

Going into the final round of the USD 3.5 million PGA tour event, Spieth leads Keegan Bradely (65) and Henrick Stenson (68) by a comfortable seven stroke margin and looks set to clinch his second consecutive title, having won the Australia Open last week.

"Yeah, it would mean a lot. It's been a heck of a trip thus far, starting with Japan, just barely missing out, and then closing it out last week. It would mean a lot to me," Spieth said when asked how it would feel winning two back-to-back trophies.

"This tournament consists of whatever it is, 18 of the top 30 in the world. This is a world-class field by every definition of it. These are the guys that win major championships. Almost everybody in this tournament has won one. I would say more than half. You guys would know. Yeah, it would mean a lot to me going into the off-season. It would give me a lot of confidence going forward looking to 2015 to be a year that is an improvement on 2014, which is the ultimate goal," he said.

Woods has been improving ever since he shot a horrendous 77 on day one and today was no different even though he still lies at the bottom of the heap.

He had one bogey on the front nine and two in the back nine but closed the day with three birdies in a row. On aggregate, he is now even par at 216.

Woods began the day with a birdie but surrendered a shot on the sixth hole. He got it back in the next and closed the front nine with two pars.

He had two bogeys on the back nine but made up with four birdies, including a hat-trick on the last three.

The 38-year old, winner of 14 Major titles, revealed that he played through fever on the front nine and was throwing up for hours before the action begun.

"Well, it wasn't easy and I fought hard. That's about it," Woods, who wore a big smile on his face after birding the 18th hole, said.

He asserted that he would not have withdrawn even if it was not his own tournament.

"I like to compete. If I can go, I can go. I'll give it. This is different. I wasn't in pain. Just was a little bit under the weather," Woods said.

"Yesterday's fever was higher but today, you know, the nausea and the vomiting before and during the round, I did not have that issue yesterday. I am on antibiotics," he said.

Bradley, who was tied eighth yesterday, moved up to tied second with Stenson after returning the second-best card of the day with a superb seven-under. The 28-year-old fired eight birdies, including five on the front nine.

Bradley's putting was superb through the day. He has come into the tournament with a short putter and for him doing well with it was very satisfying.

"It's nerve wracking for sure. I have had five years and hours and hours of practice that are now taken away from me. But it's fun to come out here and prove to everybody and myself that it's not a big deal. This is probably the best three days of putting I has had in the a couple of years."

The 28-year-old American said the second hole, on which he has birdies on all three days, was the most difficult.

"It is (most difficult). I have birdied it all three days and I have played the third hole, the par-5, two over. Can't explain that. Hit a littler 6-iron in there. Another really really good shot," he said.

Stenson got only one bride on the front nine but made up with four on the back nine to maintain his second spot.