Speaker Should Choose LoP Even If No Clear Rule: Somnath 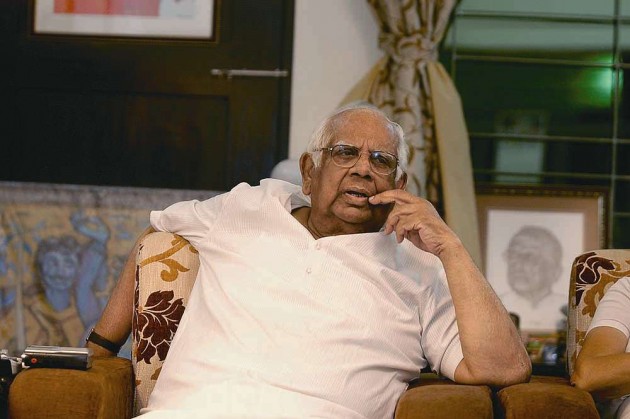 Print
A
A
A
increase text size
Outlook July 27, 2014 12:52 IST Speaker Should Choose LoP Even If No Clear Rule: Somnath

Lok Sabha Speaker Sumitra Mahajan should designate a member of the Lower House of Parliament as Leader of the Opposition even if "there is no clear applicable rule", feels one of her predecessors Somnath Chatterjee.

"That will also put an end to the fact that Indian Parliament does not have an LoP, which will weaken democratic system we have adopted," the former Speaker, who presided over the 14th Lok Sabha from 2004-2009, told PTI today.

At the outset, he made it clear that 10 per cent of the membership of the Lok Sabha is needed for an Opposition party to be given the status of the Leader of the Opposition.

He, however, hastened to add that the issue should be left to the discretion of the Speaker.

"So far as I know 10 per cent of the membership of the House.  I think this should be left to the discretion of the Speaker," he said when asked as to what was the criteria for a member of a party to get the LoP status and what should be done in the current situation.

"I believe, for the proper functioning, someone should be designated as LoP, which recognises the important role of the opposition in an elected democratic setup.

"Therefore, I feel even if there is no clear applicable rule, Honourable Speaker may kindly in her discretion designate an honourable member of the House to be the LoP. Who will be designated should be decided by the number of members of different parties have in the House," he said.

Chatterjee's remarks came in the backdrop of Attorney General Mukul Rohatgi opining that Congress is not eligible and there is no precedent since the days of the first Lok Sabha to grant the post to a party which does not have the minimum required MPs.

The AG's opinion came as a setback to Congress which has made a strong pitch for the Leader of Opposition post despite securing just 44 seats in the 543-member House. A party has to win 55 seats to get 10 per cent members.

Rohatagi had conveyed his views to Mahajan who had sought his opinion in view of the dilemma she is facing over the issue, sources said.

The top law officer of the country has said there is no precedence where a party was given the LoP position -- the status of a Cabinet Minister -- without meeting the criteria of 10 per cent seats since the days of first Lok Sabha when G V Mavlankar was the Speaker.

Even during the time of Rajiv Gandhi in 1984, Congress with over 400 seats had refused to grant LoP status to TDP for the same reason, the AG has told the Speaker.

The AG is also learnt to have rejected the contention that LoP status could be given to the leader of Congress-led UPA coalition as there is no such precedence. UPA has 60 members in the House.

BJP has said Congress may have to be content without the LoP post in the Lok Sabha as it will be difficult for the Speaker to give it to the party after she sought an opinion from the AG on the issue.