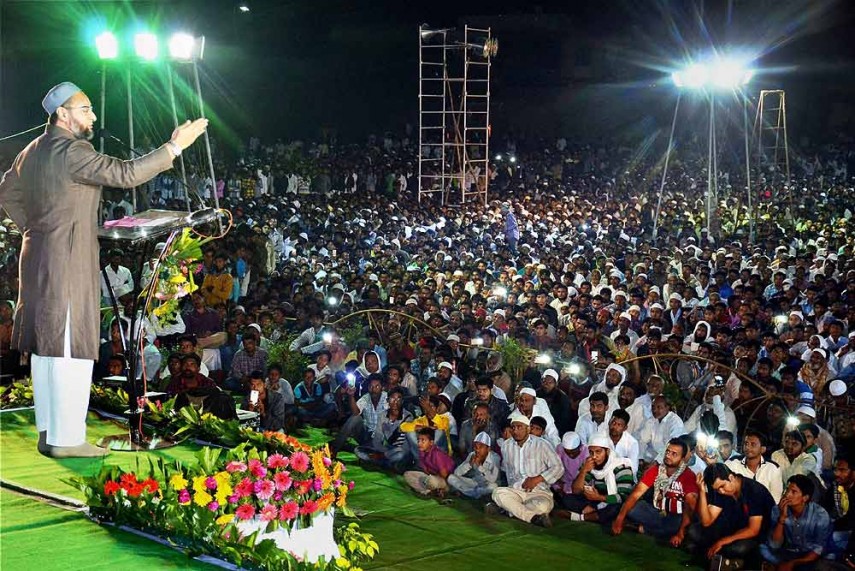 AIMIM president Asaduddin Owaisi today termed a "bunch of contradictions" the Samajwadi Party-Congress alliance for Uttar Pradesh assembly polls, and said the two parties got together in a bid to cover up their weaknesses.

In the alliance 20 candidates belong to Samajwadi Party out of the 105 who would contest on Congress symbol, Owaisi claimed.

The SP would contest 298 seats and the Congress 105, as per the seat-sharing formula clinched between the two parties yesterday for the UP polls.

"Basically, it's bunch of contradictions," Owaisi, whose All India Majlis-e-Ittehadul Muslimeen (AIMIM) is also in the fray for the crucial assembly polls, told PTI in an interview.

If the objective of the alliance was to consolidate the Muslim vote, why could not a single Muslim win in the 2014 Lok Sabha election (in Uttar Pradesh), he asked.

"What happened to your (SP and Congress) vote? So, the Congress and the SP are both trying to cover up their own weaknesses," he said, adding, "(chief minister) Akhilesh Yadav is trying to cover up his mis-governance and he has failed to fulfil his promises."

"So the people of UP would remember the 2012 election manifesto (of SP) and the 2013 Muzaffarnagar riots and unfulfilled promises. Where is the promise of reservation to Muslims? Akhilesh did not form a single committee to take this forward. These are relevant questions people will ask," the Lok Sabha MP from Hyderabad said.

Referring to SP's promise of giving pressure cooker to the poor women in the election manifesto released yesterday, Owaisi said, "He (Akhilesh) himself is in a pressure-cooker situation."

"Instead of distributing pressure cooker, SP itself is in a pressure cooker situation," he said, referring to the people questioning the achievements of the Akhilesh government.

"So, people of Uttar Pradesh will never forget Muzaffarnagar," the AIMIM leader said.  On SP's election manifesto talking about religious freedom for minorities, Owaisi asked why the state government is yet to give consent to file charge sheet against all the accused irrespective of their religion, even three years after the Muzaffarnagar riots.

"He (Akhilesh) talks about development but where is the development? Development has become a very clever device to deceive the poorer sections of society, whether it is the minorities or the Dalits.

"For example, not a single Urdu medium school has been opened in Uttar Pradesh. The 2012 election manifesto said that they will open primary and upper primary schools in minority areas, nothing has been done," he claimed.

Asked if demonetisation is going to be an election issue, Owaisi said "it will have a role to play" as he noted that local industries in places like Moradabad, Firozabad and Saharanpur are in turmoil and also the farmers were not "getting their prices" for their produce.

"There is not much difference between Akhilesh and Modi because both have cleverly used this slogan of development but development has not happened. Modi has not been able to deliver jobs. Akhilesh claimed that he has given 4.52 lakh jobs in five years. People don't believe that," he said.

"Both Modi's performance and Akhilesh's five year's performance... They will be asked important and pointed questions and people will judge them," the AIMIM supremo said.