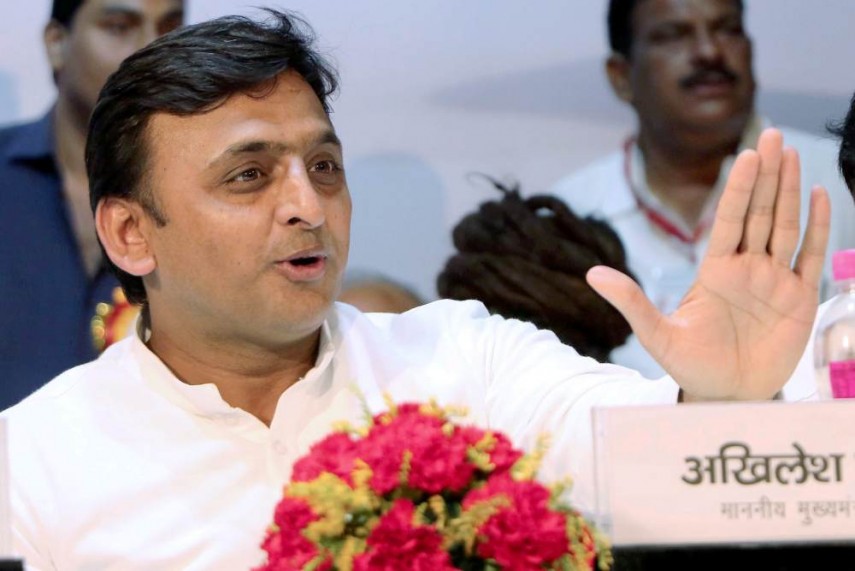 Ruling Samajwadi Party appeared to be headed for a split today as Chief Minister Akhilesh Yadav and his party supremo and father Mulayam Singh were engaged in an open face-off, sacking each other's loyalists Shivpal Yadav and Ramgopal Yadav.

While Akhilesh sacked Shivpal, his uncle and party's state unit chief, along with three other "pro-Amar Singh" ministers from his Cabinet, his father hit back by dismissing Ramgopal, pro-CM cousin and SP's national general secretary, from the party for six years.

The fast-paced developments unfolded this morning when Akhilesh held a meeting of party legislators, a day ahead of a mega meeting of party MPs, MLAs, MLCs and ministers called by Mulayam where some more tough decisions were likely to be taken.

After the meeting, the Chief Minister recommended to Governor Ram Naik that Shivpal, Narad Rai and Om Prakash Singh (all Cabinet ministers) and Sayeda Shadab Fatima (MoS - Independent charge) be sacked from his ministry. This was accepted immediately.

While the meeting was underway, hundreds of Akhilesh's supporters collected outside his residence, raising slogans in his favour.

Significantly, before Akhilesh announced the sacking of Shivpal and three other ministers, Ramgopal issued a letter written to party workers, expressing support to the Chief Minister and warning those opposing him.

"Those who oppose Akhilesh won't be able to show their faces in the legislative assembly. Where Akhilesh is, victory follows," he said in the letter.

After his sacking, Shivpal met Mulayam at his residence, which is just nearby that of the CM's bungalow.

Hours later, he announced that the SP chief had expelled Ramgopal from the party for six years.

Shivpal told mediapersons that Ramgopal was colluding with BJP and had thrice met a senior leader of the saffron party to save himself and his son from a CBI probe in connection with alleged involvement in the Yadav Singh Noida scam probe.

He said he was not worried about being dropped from the government and declared that the state Assembly elections would be fought under leadership of Mulayam.

Launching a scathing attack on Ramgopal, Shivpal said he was tarnishing the image of SP by dabbling in corruption, colluding with BJP and weakening Mulayam's leadership.

"On Mulayam's directive, Ramgopal is being stripped of his posts of party spokesman and national general secretary and is being expelled from the party for six years," Shivpal said, giving rise to intense speculation about an imminent split.

Party legislators who met at the residence of the Chief Minister today were said to be in a belligerent mood, opposing any action that could sideline Akhilesh in the run-up to the Assembly polls.

The tenor of the delegates was to crack the whip on supporters of Amar Singh, whose induction into the party two months ago had triggered a similar hullabaloo, according to party sources.

The developments came a day after Akhilesh skipped an important strategy meeting of SP district and city unit presidents called by Shivpal. The CM instead separately met the delegates later at his official residence.

SP old-timers Beni Prasad Verma and Reoti Raman Singh tried to mediate a thaw to the ongoing crisis, but their efforts did not yield any positive result.

The tussle in the party began last month when Mulayam replaced 43-year-old Akhilesh with his 61-year-old uncle Shivpal to the post of UP party chief, and also expelled several youth leaders seen as close to Akhilesh.

Shivpal's sacking came a day after a close aide of Akhilesh Yadav, MLC Udayveer Singh was expelled from the Samajwadi Party. Udayveer was sacked a few days after he shot off a stinging letter to Mulayam accusing his second wife of hatching a conspiracy against the Chief Minister.

The letter also mentions the use of black magic against Akhilesh by his step-mother.

While asking Mulayam to clarify on his political successor, Udayveer also demanded that Akhilesh be made the party's national president so that there was no room for speculation or doubt.

Udayveer had earlier this week announced that he along with other Akhilesh loyalists would boycott the SP's silver jubilee celebrations in protest protest the expulsion of many of their colleagues by Mulayam and Shivpal.

As crisis deepened in the ruling Samajwadi Party, opposition BJP sought to fish in troubled waters, saying the Governor should ask Akhilesh to prove his majority on the floor of the Assembly and till he did so, he should not take any policy decision.

"CM Akhilesh Yadav should resign or prove his majority on the floor of the Assembly," UP BJP chief Keshav Prasad Maurya told reporters.

"A government reduced to minority should not take any policy decision," he said.

As the confrontation between Akhilesh and Mulayam appeared to have reached a point of no return, reports were already doing the rounds that the Chief Minister could launch a new party -- National Samajwadi Party or Pragatisheel Samajwadi Party with motorcycle as its symbol.

The main cause of friction between the father and the son has been re-appointment of Amar Singh as the party's national general secretary, almost six years after he was removed from the SP.

Along with it, trouble brewed in the party after Shivpal forced merger of a political outfit headed by former gangster Muqtar Ansari with SP. Akhilesh initially refused entry to the Qaumi Ekta Dal, but was later forced into submission by his father.

Shivpal calculated that the new affiliation would boost the Samajwadi Party's standing among Muslims, especially in eastern UP.

But, Akhilesh was convinced it would allow the opposition to accuse the party of teaming with a nefarious leader for political gain.

Incidentally, the developments have thrown cold water over the upcoming silver jubilee anniversary of the party on November 5, which could be given a miss by Akhilesh who has announced a 'rath yatra' from November 3.