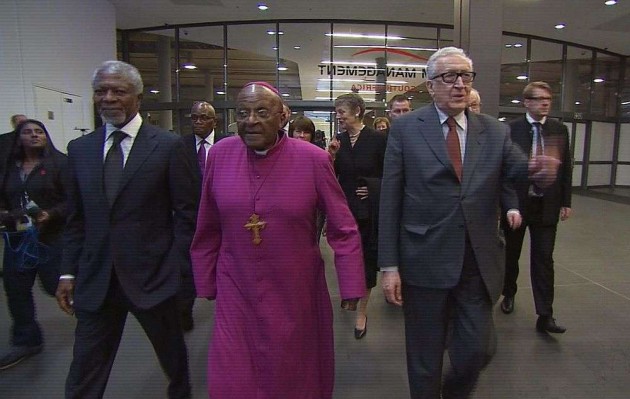 South Africa's Nobel Peace Prize winner Desmond Tutu marked his 84th birthday on Wednesday with one of his first public appearances since being hospitalized for a persistent infection.

Tutu, who won the Nobel in 1984 for his crusade to end apartheid, South Africa's now abolished system of white minority rule, attended the fifth annual Desmond Tutu Peace Lecture at the University of the Western Cape in Cape Town. Thuli Madonsela, South Africa's Public Protector, known for her work against corruption, gave the speech.

Walking with a cane and looking a bit frail, Tutu walked onto the stage with his daughter, Rev. Mpho Tutu. Tutu, a retired Anglican archbishop for Cape Town, has been hospitalized several times since July.

"Archbishop Tutu has been a tireless and visible ambassador of our country all over the world for decades, promoting human rights and justice," said President Jacob Zuma in a statement. "He continues to be a beacon of hope who is highly regarded by the South African people.